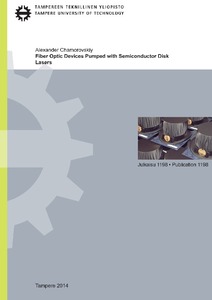 A picosecond semiconductor disk laser followed by the ytterbium-erbium fiber amplifier offered supercontinuum generation spanning from 1.35 μm to 2 μm with an average power of 3.5 W. By utilizing a 1.15 μm semiconductor disk laser, a pulsed Ho3+-doped fiber lasers for a 2 μm spectral band were demonstrated. 118 nJ pulses at the repetition rate of 170 kHz and central wavelength of 2097 nm were produced by a holmium fiber laser Q-switched by a carbon nanotube saturable absorber. Sub-picosecond holmium-doped fiber laser modelocked with a broadband carbon nanotube saturable absorber and a SESAM were developed. Using the former saturable absorber, ultrashort pulse operation with the duration of ~ 890 fs in the 2030-2100 nm wavelength range was obtained. The results in the presented dissertation demonstrate the potential of the semiconductor disk laser technology for pumping fiber amplifiers and ultrafast lasers.