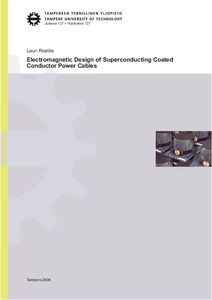 Superconducting YBCO cables are the latest step in the development of their kind, and their viability is constantly improving, because YBCO tapes are going down in price. The Super3C project aims to design, manufacture, and test a superconducting 30-m, 1-kA, 10-kV YBCO cable prototype, which will provide important information about the YBCO cable performance. A successful design of this cable must combine cryogenic, mechanical, and electromagnetic aspects. This thesis focuses on the electromagnetic part, which aims at low AC losses, a high critical current with a small amount of superconducting tape, and good tolerance of fault currents. With this in mind, computational tools were developed to predict the above cable capabilities. The special characteristics sought for in modeling the superconductor were highly nonlinear resistivity and strong magnetic-flux-density-dependent critical current density. Another aspect to be addressed in modeling is the troublesome high aspect ratio of the YBCO.

In this work, a circuit-analysis-based model was developed to predict AC losses in YBCO cables. Predicted losses were close to those measured for a one-layer, 0.5-m YBCO cable. Furthermore, some tape-wise variation was measured in the current, but computations suggested that the problem can be avoided with the 30-m cable. In addition, an algorithm was developed to compute the cable’s critical current to further improve the AC loss model. Results suggest that tape arrangements can greatly affect the cable’s critical current, and in cable use, the tape’s critical current can be higher than in the self-field. The critical current algorithm was exploited to solve intrinsic material parameters from ordinary voltage-current measurements. The impact of fault current was analyzed by solving the heat conduction equation together with Maxwell’s equations.