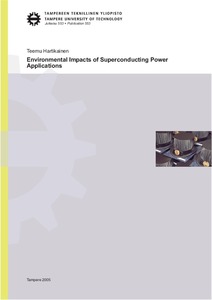 Superconducting power applications boast several properties that can prove them environmentally advantageous over conventional electric power applications. Such are, for example, up to 50% lower losses, which means savings in electricity and thus savings in greenhouse gas (GHG) emissions from electricity production, and less raw materials required to construct devices resulting in lower environmental impact of manufacturing. This thesis reviews the superconducting power applications, namely generators, transformers, electric motors, cables, superconducting magnetic energy storages (SMES), fault current limiters (FCL) by introducing first their theoretical background and then each application from the point of view of advantages they pose. By starting from the mining of materials, a life cycle assessment (LCA) is conducted for commercial NbTi superconductor. Comparison between conventional copper wire and NbTi/Cu wire is made and magnets made of both materials are also examined from LCA-perspective. Detailed calculation of GHG emissions reduction potential of Finnish and European electrical networks is presented in view of the Kyoto Protocol, which requires the EU countries to reduce their GHG emissions by 8% from 1990 levels between 2008 2012. The proposed distributed generation (DG) networks are considered as one solution to introduce new renewable energy sources to the network and lower the environmental impact of energy production. Here this issue is studied by examining the environmental advantages that superconducting devices could bring to a DG-network. Finally, magnetic separation as a way to reduce heavy metal emissions from steel mill wastewaters is studied by a novel prototype of an open-gradient magnetic separator. Results showed that above certain break-even power, superconducting machinery can save electrical energy and thereof emissions from electricity generation. When considering the complete life-cycle of electrical machines, superconducting devices become even more preferable from environmental point of view. In DG-networks the advantages of superconductivity are quite modest and are concentrated on the issue of electricity storage. With magnetic separators it is possible to efficiently separate heavy metals from fluid streams. Magnetic separation is thus seen as a promising alternative to conventional filtration techniques.