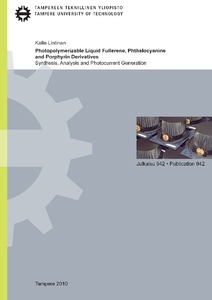 Photopolymerizable liquid monomers of fullerene, phthalocyanine and porphyrin were synthesized, polymerized and used as photoactive materials in organic solar cell structures. The design of the molecules requires the combination of three major parts: the functional core of the original molecules, alkylic side chains for liquid state and polymerizable end groups. The harsh conditions of the chromophore synthesis require a modular design, where the chromophore core and polymerizable tails are synthesized separately, and combined later by mild acylation.
A means of ultra-thin-film polymerization, both photo and thermal, were devised. All of the chromophores could be polymerized as ultrathin films. Because of their high absorbances, it was possible to use UV-Vis spectroscopy to monitor polymerization indirectly; as the films were of only a few monomer units thick, it was possible to dissolve the unreacted monomer residues afterwards and thus determine polymerization degrees as a function of the absorbance of the polymerized film.
The molecules were studied extensively to yield the parameters for thin film preparation, photopolymerization, and photocurrent generation. While the monomers were liquid at room temperature, the hardness of the polymers was that of crosslinked epoxy plastics.
The porphyrin monomer was used to study photopolymerization kinetics due to its unique self-photoinitiating properties. Polarization modulation IR spectroscopy was used to study real-time photopolymerization of the porphyrin monomer at varying temperatures, yielding rate constants and the activation energy of the reaction. It was the first published study of ultra-thin-film polymerization kinetics.
The monomers were polymerized in situ to form bilayers, bulk heterojunctions or hybrids of both, to create a photoactive structure for photocurrent generation. An extensive set of samples was prepared and studied. The monomers employed in this work were optimized for easy photopolymerizability and as such produced unoptimal power conversion efficiency. Nevertheless the basic structure of the polymer lends itself well to modification for improved organic photovoltaic performance.