On the Synthesis, Morphology, and Applications of Engineered Aerosol Nanoparticles 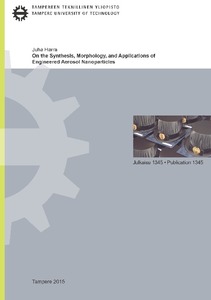 Nanotechnology, the manipulation of matter at the scale of 1–100 nm, is present in everyday life and continues extending into new areas of application. Aerosol synthesis routes, the production of nanoparticles in the gas phase, are known to be continuous, highly controllable, and even suitable for fabricating different types of nanostructured metamaterials—materials with properties not found in nature. In this thesis, single and multicomponent engineered aerosol nanoparticles with different morphologies were synthesized for applications involving interactions between light and matter. The synthesized nanoparticles included spherical silver particles, titania-encapsulated iron oxide particles, silver-decorated silica particles, and silver–titania composite doublet particles. Furthermore, the studied applications for the nanoparticles were magnetically separable photocatalyst nanopowders and nanostructured metal–dielectric metamaterials with linear and nonlinear optical properties, more specifically, localized surface plasmon resonance and second-harmonic generation, respectively.

The aerosol synthesis techniques utilized for the nanoparticle production in this thesis included particle size selection, sintering, encapsulation, and coating. The sintering of the size-selected silver agglomerates to spheres continued the trends found from the literature. In the simple encapsulation process, liquid precursor containing solid particles was sprayed into a tubular furnace where the precursor thermally decomposed on the surface of the solid particles, forming multicomponent particles. This approach was demonstrated by synthesizing titania-encapsulated iron oxide particles. As titania and iron oxide are known to be photocatalytic and magnetic, respectively, the produced nanopowder could find use as a magnetically separable photocatalyst. The silver coatings on the silica and titania carrier particles, accomplished by physical vapor condensation, were found to form different types of morphologies due to the migration of the silver on the carrier particles.

The wavelength of the localized surface plasmon resonance of spherical silver particles deposited on glass substrates was tuned between 400–450 nm with the particle size. Due to the random deposition process, particle–particle contacts on the substrate caused broadening of the extinction spectrum with higher area fractions. On the other hand, the silver-decorated silica nanoparticles maintained the narrow plasmon resonance band even with high particle number densities. This enabled the fabrication of thicker bulk-type optical materials. The nonlinear optical properties of bulk-type multilayer nanostructures consisting of alternating layers of silver-decorated silica nanoparticles and pure silica were investigated. It was proposed that the porous particle layers were in a key role in the formation of the required non-centrosymmetric structure. Furthermore, both the silver particles and the multilayer structure were important for the second-harmonic generation, whose intensity increased with the number of layers. The fabricated structures could be further optimized in order to increase the conversion efficiency of the second-order nonlinear optical process.