Nanoimprint Lithography – A Next Generation Patterning Method for Nanophotonics 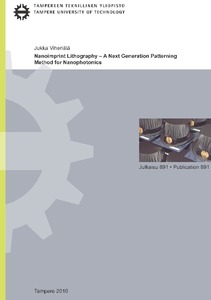 It is foreseen that nanoimprint lithography, NIL in short, will in the course of time have a strong impact on device applications which require precise and affordable nano-scale surface fabrication. My Thesis investigates NIL by applying it to various applications, while studying and solving a number of NIL-related physical and technological problems. When starting the work, the key challenge was to understand all the factors that could cause imprecision in the fabrication optical components. We expected that soft, and potentially nonprecise, stamps would prevent exact replication of functional components. However, we learned that with proper design of the stamp the precision of the stamp was very satisfactory.

Among many NIL methods available today, I decided to focus on a particular NIL version which relies on soft stamps in a regular mask aligner. I believe that soft UV-NIL will have a remarkable influence on nano-scale science because it is an affordable method to replicate nano-patterns on the wafer scale, despite the existence of other NIL methods which may have advantages over soft UV-NIL. The opportunity to utilize a mask aligner, the workhorse in every clean room for lithography, to replicate micro and nano-patterns in two and three dimensions is very tempting. I think that NIL using replicated soft stamps in a UV-mask aligner can make nano-pattering as accessible to everyone as the replication of micropatterns by means of photomasks and UV mask aligners.

For this Thesis, I have chosen several applications, including distributed feedback laser diodes, patterning and processing approaches of the top-down localization of indium arsenide quantum dots (QDs), patterning the facets of optical glass fibers, and preparing large-area nanoperforated membranes and membranous optical elements. I shall also discuss further development of high-aspect-ratio etching of gratings and report on novel etch results obtained for GaAs / AlGaAs and GaSb / AlGaSbAs material systems.

A major contribution in this Thesis to device fabrication was probably the development of an integratable, re-growth-free high performance laser where the grating was laterally coupled to the cavity field by applying soft UV-NIL to produce a strong resonance between the fundamental lasing mode and the grating.

My work on the top-down localization of InAs quantum dots and selective epitaxial growth was interesting because soft UV-NIL creates an extraordinary potential to prepare new materials and devices. I think that our work has been successful as to developing a soft UV-NIL technological platform, which yields precisely patterned growth-templates. I dare say that there is hardly any other lithography which could supply these templates to the same standard as soft UV-NIL.

One of the examples of the usefulness of NIL is the work in which we prepared a grating on a facet of an optical fiber; i.e., an optical fiber element directly integrated into the fiber-end using a process that is easily amenable to volume production.

Our studies with membranes were driven by the need to develop a nano-sieve, which could be integrated into a silicon MEMS chip. Our study produced novel ways to make sturdy nano-perforated membranes, which were more than 3000 times wider than the thickness of the membrane. Finally, we demonstrated a novel way to integrate membranous optical elements with an optical fiber using a through-wafer via.