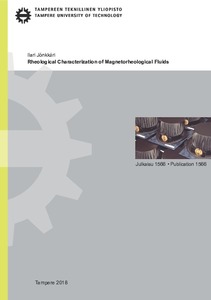 Magnetorheological (MR) ﬂuids are smart materials that respond to an external magnetic ﬁeld by changing their rheological properties. These ﬁeld dependent properties are typically studied by rotational rheometry. Since the data of the rotational rheometer measurements may include errors caused by various sources, it is essential to study the rheological characterization of the MR ﬂuids before the results are used in research. A major drawback of MR ﬂuids is sedimentation that may weaken ﬂuids MR response over time. The sedimentation is settling of magnetic particles induced by the large density mismatch between the particles and the carrier ﬂuid. In this study, the rheological characterization of MR ﬂuids by a rotational rheometer is ﬁrst examined to reveal how the measurements should be done in order to gain reliable knowledge about their properties. Secondly a bidisperse size distribution of magnetic particles, consisting of micron- and nano-sized particles, was studied as a way to improve the sedimentation stability.

The study of rheological characterization of MR ﬂuids by rotational rheometer involved determination ﬁeld dependent yield stresses by using various measuring procedures and plate-plate measuring geometries with diﬀerent surfaces. The results demonstrated that the measured static and dynamic yield stresses are strongly aﬀected by the plate surface characteristics as the magnetic and roughened plates provided considerably higher values than the smooth non-magnetic plates. A likely source for the diﬀerence is wall slip that may happen during rotational rheometer measurements. Furthermore, it was shown that the wall slip of MR ﬂuid does not cause measuring gap height dependency of the results, which is surprising, as its existence is commonly used as an indicator of the wall slip.

The bidisperse MR ﬂuids were prepared by dispersing micron- and nano-sized particles in Silicone Oil (SO) or Ionic liquid (IL). The impact of the carrier ﬂuid type and nanoparticle fraction, composition and size on the oﬀ-state viscosity, sedimentation stability and MR response were studied. The maghemite (γ − Fe2O3) nanoparticles used in the study were synthesized by Liquid Flame Spray (LFS) method that oﬀers an interesting alternative for the chemical co-precipitation commonly used to prepare magnetic nanoparticles as it is a very versatile process. The dispersion of the micron-sized particles was better IL than in SO indicated by lower oﬀ-state viscosity and higher MR response. A partial substitution of micron-sized particles by nanoparticles provided improved sedimentation stability with both carrier ﬂuids. The impact became stronger as the nanoparticle fraction was increased or the nanoparticle size was decreased. Both lead to higher particle surface to volume ratio and greater number of particles. These can improve the sedimentation stability by inducing higher drag between the particles and the carrier ﬂuid or by forming a thicker nanoparticle halo around the micron-sized particles. The nanoparticles had only a minor impact on the ﬂuids MR response, but often increased the ﬁeld independent viscosity, which can be considered as a disadvantage in some applications.