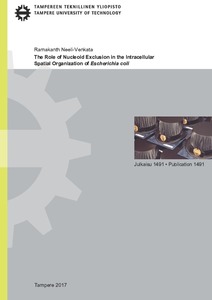 Not long ago, bacterial cells were regarded as organisms with hardly any internal organization, due to lack of visible physical compartments and, thus, proteins were believed to be distributed randomly. Since then, advances in microscopy, in in vivo protein labeling with fluorescent tags, and in image analysis techniques have enabled us to probe biological events at a single-cell, singletime moment, and single-molecule level. The results from these observations have led to a radical change in this view and, thus, revolutionized the field of bacterial cell biology. Namely, this novel source of information has made evident that proper bacterial functioning is not possible without a highly spatially organized, dynamic internal composition that depends on the deployment of functional proteins and other cellular components in specific locations, at specific moments.

The spatiotemporal organization of the functional proteins and other cellular components play a fundamental role in several key regulatory processes, such as transcription, translation and cell division. One class of proteins, termed as ‘DNA-binding proteins’, are associated with DNA replication and segregation. Not surprisingly, they preferentially locate at midcell, where the chromosomal DNA is condensed into a dynamic structure called ‘nucleoid’. Another class of proteins, termed as ‘polar proteins’, are majorly involved in physiological behaviors such as chemotaxis, sugar uptake, motility and adhesion. In agreement, they are preferentially localized at the cell poles in the case of rod-shaped bacteria such as E. coli. Finally, there is a third class of proteins, called as ‘cytoskeletal proteins’, whose location differ widely during cell growth. For example, the Min system, a major cell division regulatory system, consisting of MinCDE proteins have a remarkable dynamic pattern inside the cell. These proteins localize for about half a minute in one cell half and then switch rapidly to the opposite half. This back and forth motion continues until the polymerization of the division protein FtsZ results in a ring-like structure at the cell center prior to cell division.

Cellular components, other than functional proteins, also exhibit a highly-organized spatial distribution. These components include plasmids, enzyme megacomplexes and unwanted protein aggregates. For example, protein aggregates, formed as a result of environment stress or errors in protein homeostasis, are generally sequestered into inclusion bodies (IBs) that localize at the cell poles. This process of polar localization is symmetric. However, following several cell division events, results in progeny cells containing the old pole having more aggregates than the new pole possessing progeny cells. Subsequent divisions lead to cell generations where some cells inherit more aggregates than others. Importantly, this was found to be positively correlated with increased division times, i.e., cellular aging. It is believed that such asymmetric partitioning of unwanted aggregates may be critical for the rejuvenation of bacterial populations. It is thus of major importance to understand the underlying mechanisms that are responsible for the above-described events.

In this thesis, using Escherichia coli as our model organism, we started by investigating and validating the hypothesis that the presence of the nucleoid at the midcell is responsible for the ability of this organism to segregate unwanted protein aggregates to the cell poles. We next investigated and characterized the robustness of these mechanisms to external perturbations and stressful environmental conditions. Afterwards, we hypothesized that the phenomenon of nucleoid exclusion should not be limited to protein aggregates alone but, instead, for physical reasons, it should influence any large macromolecule that is not affected by a transport or self-propelling mechanism (which is the case of all proteins in E. coli). Consequently, we hypothesized and subsequently proved that it should influence self-assembling proteins, such as the transmembrane Tsr chemoreceptors, which have a major role in bacterial chemotaxis. In addition, we also investigated to what extent cell-to-cell diversity in nucleoid sizes contributes to the cell-to-cell diversity in the spatial distribution of polar-localized proteins. For these studies, we made use of efficient fluorescent tags, in vivo single-cell, single-molecule time-lapse microscopy, tailored image and signal processing techniques and stochastic biophysical models.

Our results provide new perspectives regarding the role of the nucleoid in the spatial organization of protein aggregates as well as chemoreceptor clusters in E. coli. Interestingly, regarding the latter, nucleoid exclusion from midcell was shown not to be the sole phenomenon for the proper localization of Tsr protein clusters. However, it is expected to be the most robust, namely, in stressful environments or when the cell is subject to external perturbations, than the diffusion-andcapture mechanism mediated by the Tol-Pal complexes, as it does not require production of proteins or is under stringent control. Further, unlike the other mechanism, it is energy-free.

Given the rapid developments in single-cell biology techniques, particularly the emergence of super-resolution microscopy techniques, improved fluorescent probes, high-throughput and largescale biochemical methods and theoretical tools, we expect several developments in the near future that will allow assessing further the role of the nucleoid as a ‘spatial organizer’ of the cellular architecture of E. coli.