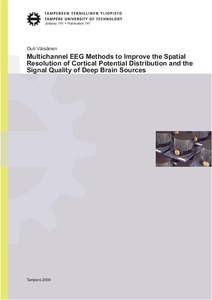 Electroencephalography (EEG) is a convenient technique for studying the function of the brain non-invasively from the surface of the scalp. The greatest advantages of EEG are its temporal resolution on a millisecond scale and its affordability compared to other non-invasive techniques employed to register brain activity. The development in amplifier technology, computerized signal processing methods and modern EEG caps make the application of multichannel EEG systems a feasible objective. Nowadays measurement systems of up to 256 electrodes and over are available. It is thus important to evaluate the benefits obtained with the multichannel systems when different functions of the brain are being studied.

In this thesis two opposite applications of multichannel EEG are investigated. The first of these deals with superficial sources and concerns improving the spatial resolution of inverse cortical potential distribution. The other application concerns the modification of the measurement sensitivity distributions of EEG leads to improve the signal-to-noise ratio (SNR) of signals generated deep within the brain.

When studying the spatial resolution of cortical potential distribution, special attention was given to an examination of the effect of measurement noise and relative skull resistivity on the estimation of accuracy of the inverse solution. A three-layer spherical head model was applied with new realistic estimates for skull resistivity. The measurement noise levels were estimated in realistic measurement environments, bearing in mind that when the cortical potential distribution is studied as a solution of the inverse problem, the entire brain activity is considered as the desired signal. The results of the theoretical evaluation show that with the new realistic estimates for relative skull resistivity, the application of up to 128 - 256 electrodes improves the spatial resolution of cortical potential distribution.

To improve the SNR of signals generated by deep EEG sources, multielectrode EEG leads were developed. Theoretically a multielectrode EEG lead consists of two terminals, which are both connected through a resistor network to several electrodes on the surface of the scalp. Reciprocity and lead field theorems were applied to modify the sensitivity distribution of a multielectrode lead to be optimal for deep brain sources. The results of preliminary experimental evaluation conducted by studying brainstem auditory evoked potentials show that with a multielectrode EEG lead consisting of 114 electrodes, it is sufficient to average 45 % of the number of epochs needed with bipolar leads to obtain a similar SNR. The results of the theoretical study demonstrate that further improvements can be obtained by such steps as optimizing the electrode positions.