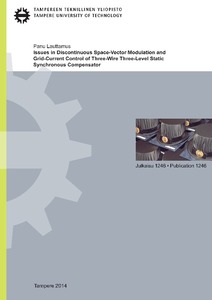 In modern power systems, the quality of electric power should be maintained within statutory limits and tolerances to enable normal and uninterrupted operation of the load equipment in their electrical environment. However, the severity of power quality problems, as well as the frequency of their occurrence, has been in continuous increase because of growing energy consumption, proliferation of non-linear loads, and the sensitivity of modern loads to electromagnetic disturbances in the networks. Therefore, more efficient and faster-acting power quality conditioners are needed. Currently the broadest operating range and the fastest dynamics are provided by solid-state power quality conditioners based on pulse-width modulated power converters. Considering high power and medium to high voltage applications, the multilevel converter topologies have gained special interest because they can generate low-harmonic voltage and current waveforms by using lower switching frequencies and with no need for complex transformer circuits.

This thesis studies the digital control of a STATCOM (static synchronous compensator) based on the three-wire three-level neutral-point-clamped rectifier. The focus is on the control system functions that primarily determine the dynamic behavior and the performance of the compensator. The main addressed research issues are the pulse-width modulation strategy and the grid current control, using a suitable combination of fundamental theory, computer-aided modelling and simulations, and laboratory experiments.

A discontinuous space-vector modulation algorithm is implemented for a three-level STATCOM. Space-vector theory is used to analyse the effect of switching sequence arrangement on the switching ripple current. It is revealed that the sequences should be arranged according to a specific method to maintain sinusoidal grid currents when an LCL grid interface filter is used. Furthermore, the output voltage distortion caused by the blanking times and the semiconductor voltage losses is studied and a compensation algorithm is developed. After that, two grid current control strategies are analysed by means of dynamic modelling and simulations. The main problems observed are poor capability to reject low-order grid voltage harmonics and the sensitivity to parametric uncertainties. The presented theoretical considerations are validated with laboratory tests of a 10 kVA three-wire three-level STATCOM prototype.