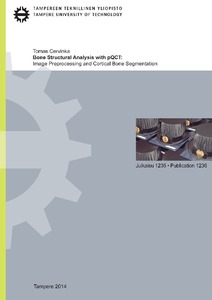 Bone fragility, or conversely, its strength is largely determined by structural properties (e.g., cross-sectional geometry, cortical thickness and trabecular architecture). Accordingly, a proper structural analysis of bones might help identify those individuals who are susceptible to fragility fractures. In this respect, peripheral quantitative computed tomography (pQCT) provides a reasonable option to assess bone cross-sectional geometry and separate it into the trabecular and the cortical compartments. Although the commonly used pQCT systems lack sufficient spatial resolution to capture fine structural traits compared with present high-resolution pQCT (HR-pQCT) systems, they are cheaper and still widely used among bone researchers. Current techniques used for pQCT image analysis (e.g., median filtering, threshold-based segmentation), however, may not be optimally suited for characterizing bone geometry and strength.
Therefore, in this work, image preprocessing based on a statistical approach, and a fast and reliable segmentation method were developed with the aim of improving the in vivo precision of pQCT image analyses, in vivo assessment of tibial bone geometry and strength. The segmentation method is based on the outer boundary detection and subsequent shrinking (OBS) procedure. These methods were applied on various phantom and in vivo pQCT image data and their performance was compared with commonly used analysis approaches and, in the case of segmentation, with a more advanced level-set based method. The manual segmentation of cortical bone, done by 3 independent evaluators, was considered as a gold standard.
The findings demonstrate that the developed preprocessing method provided the most consistent results and improved the reliability of the analysis of the cortical bone area by approximately 30%. However, the preprocessing failed to improve the assessment of trabecular density. Nevertheless, some coarse structural patterns could be seen in the preprocessed images in contrast to a disperse distribution of density levels in the raw images. Further, the developed OBS method showed nearly 50% less variation in error compared with threshold-based analysis and, in conjunction with the developed preprocessing method, agreed well with the results obtained from manual segmentation. The level-set based segmentation resulted in a consistent ~15% mean overestimation of all geometrical traits with a similar variation of data as that obtained from the OBS method.
The results of this research show that the preprocessing method can enhance cortical bone analysis. Further, the OBS method (i) improved assessment of cortical geometry, (ii) enhanced cortical bone analysis of pQCT images and (iii) can, in conjunction with the developed preprocessing, form a simple and applicable pQCT image analysis tool for clinical bone research applications.