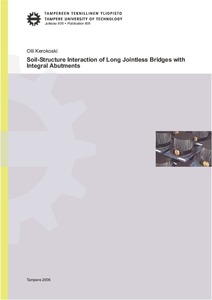 More than 1000 jointless bridges have been built in Finland during recent decades. The maximum length of a symmetrical road bridge has been 70 meters, that is, 35 m + 35 m from the centre of thermal movements.


Integral abutment bridges are best suited for locations providing enough space to build a sufficiently long deck with a low-gradient slope where the embankment is stable and its settlements are small.


In the presented empirical study, the main subjects of interest were: earth pressures after cyclic abutment displacements, behaviour of pavement near the abutments and applicability of Finnish bridge construction practice to integral abutment bridges. The instrumentation of Haavistonjoki Bridge along the Tampere Jyväskylä highway was completed in autumn 2003. The data were collected by monitoring altogether 191 gauges installed in the bridge structures during construction. The instrumentation was used to measure, for instance, the abutment´s horizontal displacement, abutment rotation, abutment pile strains, earth pressure behind abutments, pier strains, concrete deck strains, transition slab strains, superstructure displacements, frost depth, air temperature as well as thermal gradients in the superstructure next to abutment piles and in the approach embankment. Haavistonjoki Bridge is a 56 m long continuous 3-span slab bridge. The bridge is unskewed and totally jointless. The instrumentation showed, for example, that the behaviour of large steel pipe piles under an integral abutment can be sufficiently predicted by structural calculations.


Haavistonjoki Bridge with its transition slabs was modelled with a 2D FEM model considering nine construction stages and the effect of all the separate stages on forces exerted against the structures. The bridge was modelled also with a general 3D FEM model code with three different values for the springs modelling the behaviour of the soil around the piles and behind the abutment. The measured earth pressures on the bridge abutments were quite high because the backfill was well compacted and the values calculated with a soil modulus of elasticity Ed = 250,000 kPa corresponded best to the measured values.


Tekemäjärvenoja Railway Bridge is a continuous slab bridge with integral abutments. The ballasted slab carries a double-track structure. At the time of instrumentation in 2004, it was part of an unfinished railway track, a direct line from Kerava to Lahti in southern Finland that is to be completed in autumn 2006. The railway bridge was tested by special arrangements with four heavily loaded wagons on the bridge with the focus on horizontal forces and displacements.


The horizontal displacement earth pressure and rotation earth pressure relations of a wall moving within soil were modelled with a 2D FEM model. The studied earth pressures were active and passive pressures as well as all intermediate pressures and corresponding shear stresses on the surface of the transferring structure. Traditional earth pressure theories corresponded to the calculated results in the case of the upper parts of the horizontally transferring wall only if the friction angle between the structure and the soil was correctly considered. The effects of cyclic horizontal wall displacements were also evaluated with several different soil input values. According to the calculation results, large non-reversible deformations develop inside the approach embankment soil and earth pressures increase the most during the first five cycles.


Frozen soil is plastic and the mechanical properties of the soil depend, for instance, on the loading rate, temperature and stress state. The horizontal displacement of bridge piers due to temperature change is very slow compared to the general strain rates measured in tri-axial and compression tests. The analysis of a long jointless bridge in frozen soil was made with a 3D FEM spring model. The abutment with its piles and lateral springs as well as the deck of an imaginary 120 m long jointless bridge were modelled on the basis of the Haavistonjoki Bridge. By varying the stiffness of the upper level pile springs below the piers in calculations, it was possible to recommend the lateral spring coefficient for frozen soil.


Besides axial loading, cyclic abutment displacement and rotation and deformations in the embankment exert forces on abutment piles. As the integral abutment and the embankment move simultaneously, the horizontal resistance of soil against the piles is smaller than the resistance of individual piles. Therefore, it is easier for the pile top connected to the abutment to move horizontally within soil compared to an individual pile.


The forces exerted against an individual pile transferring horizontally within soil were evaluated with a 2-dimensional FEM model. The displacement force relation corresponded to the Finnish design practice satisfactorily with ordinary pile sizes.