Depth-Map Image Compression Based on Region and Contour Modeling 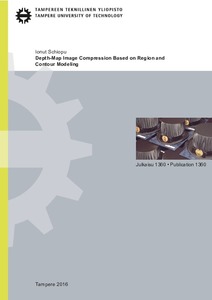 The first group of methods addresses the lossless compression problem. The introduced methods are using the approach of representing the depth-map image in terms of regions and contours. In the depth-map image, a segmentation defines the regions, by grouping pixels having similar properties, and separates them using (region) contours. The depth-map image is encoded by the contours and the auxiliary information needed to reconstruct the depth values in each region.

One way of encoding the contours is to describe them using two matrices of horizontal and vertical contour edges. The matrices are encoded using template context coding where each context tree is optimally pruned. In certain contexts, the contour edges are found deterministically using only the currently available information. Another way of encoding the contours is to describe them as a sequence of contour segments. Each such segment is defined by an anchor (starting) point and a string of contour edges, equivalent to a string of chain-code symbols. Here we propose efficient ways to select and encode the anchor points and to generate contour segments by using a contour crossing point analysis and by imposing rules that help in minimizing the number of anchor points.

The regions are reconstructed at the decoder using predictive coding or the piecewise constant model representation. In the first approach, the large constant regions are found and one depth value is encoded for each such region. For the rest of the image, suitable regions are generated by constraining the local variation of the depth level from one pixel to another. The nonlinear predictors selected specifically for each region are combining the results of several linear predictors, each fitting optimally a subset of pixels belonging to the local neighborhood. In the second approach, the depth value of a given region is encoded using the depth values of the neighboring regions already encoded. The natural smoothness of the depth variation and the mutual exclusiveness of the values in neighboring regions are exploited to efficiently predict and encode the current region's depth value.

The second group of methods is studying the lossy compression problem. In a first contribution, different segmentations are generated by varying the threshold for the depth local variability. A lossy depth-map image is obtained for each segmentation and is encoded based on predictive coding, quantization and context tree coding. In another contribution, the lossy versions of one image are created either by successively merging the constant regions of the original image, or by iteratively splitting the regions of a template image using horizontal or vertical line segments. Merging and splitting decisions are greedily taken, according to the best slope towards the next point in the rate-distortion curve. An entropy coding algorithm is used to encode each image.

We propose also a progressive coding method for coding the sequence of lossy versions of a depth-map image. The bitstream is encoded so that any lossy version of the original image is generated, starting from a very low resolution up to lossless reconstruction. The partitions of the lossy versions into regions are assumed to be nested so that a higher resolution image is obtained by splitting some regions of a lower resolution image. A current image in the sequence is encoded using the a priori information from a previously encoded image: the anchor points are encoded relative to the already encoded contour points; the depth information of the newly resulting regions is recovered using the depth value of the parent region.

As a final contribution, the dissertation includes a study of the parameterization of planar models. The quantized heights at three-pixel locations are used to compute the optimal plane for each region. The three-pixel locations are selected so that the distortion due to the approximation of the plane over the region is minimized. The planar model and the piecewise constant model are competing in the merging process, where the two regions to be merged are those ensuring the optimal slope in the rate-distortion curve.