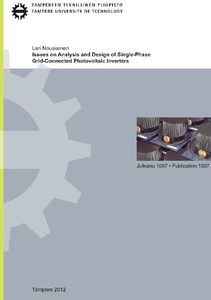 This thesis provides a comprehensive study of the problems in single-phase grid-connected photovoltaic (PV) systems. The main objective is to provide an explicit formulation of the dynamic properties of the power-electronic-based PV inverter in the frequency domain. Such a model is used as the main tool to trace the origins of the observed problems that cannot be studied with the conventional time-domain analyses. The dynamic model also provides the tool for deterministic control-system design.
Grid-connected PV inverters have been reported to reduce damping in the grid, excite harmonic resonances and cause harmonic distortion. These phenomena can lead to instability or production outages and are expected to increase in the future, because the installed capacity of the grid-connected PV energy is rapidly growing. A PV generator (PVG) itself is a peculiar source affecting the inverter dynamic behavior. The PVG is internally a current-source with limited output voltage and power. The nonlinear behavior yields distinguishable operating regions: the constant-current region at the voltages lower than the maximum-power-point (MPP) voltage and constant-voltage region at the voltages higher than the MPP voltage. Such a behavior is quite well known but not really understood to need special attention. Vast majority of the photovoltaic inverters originate from the voltage-source inverter (VSI) with a capacitor connected at the input terminal for power-decoupling purposes. It is convenient to assume that the inverter is supplied by a voltage source and perform the analyses based on the existing modeling and design teqhniques of the voltage-fed (VF) VSI. However, the input voltage of a PV inverter must be controlled for MPP-tracking purposes, which implies that the inverter has to be analyzed as a current-fed (CF) inverter. Such analysis reveals that the CF VSI has second-order dynamics compared to the first-order dynamics of the VF VSI. The control dynamics of the CF VSI is also shown to incorporate right-half-plane zero and pole introducing control-system-design constraints.
This thesis presents the dynamic modeling procedure of PV inverter both at open and closed loop taking into account the type of the input source. The dynamic behavior of the PVG is modeled as an operating-point-dependent dynamic resistance, which is shown to shift the operating point dependent zero and pole in the inverter control dynamics between the right and left halves of the complex plane. It is also shown that the negative-incremental-resistance behavior of the inverter output impedance makes the inverter prone to instability and the grid to harmonic resonance problems, and that such a behavior can originate e.g. from the grid synchronization and the cascaded control scheme. It is important to recognize such a behavior in order to enable reliable largescale utilization of the PV energy.