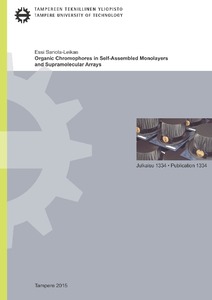 Large aromatic chromophores, e.g. phthalocyanines or perylene derivatives are widely used in modern photonic applications. For these systems, well-organized films of the chromophores are very important. One of the ways to ensure the order on molecular level is to bind the organic dyes covalently to a solid substrate with a suitable anchor group. Expanding the concept, multilayered supramolecular assemblies can be built on surfaces as well.

In the present Thesis various chromophores with a capability to anchor onto a solid surface were prepared. Synthesized molecules were porphyrins, phthalocyanines, and perylene mono- and diimides with different substituents. The anchor-surface pairs were of several types, and the chromophores were attached to a surface by one- or two-step methods.

Two of the perylene monoimide derivatives were found to be a perfect basement for construction of multilayered films. Using a metal-ligand interaction it was possible to prepare stable double layers, as well ten molecules thick stable deeply colored multilayer films. The developed approach is versatile and will allow in future to expand the capabilities of molecular film architecture.