Effects of microstructural features, thermal shocks and strain rate on the mechanical response of granitic rocks 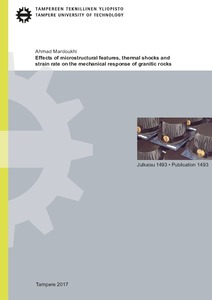 Percussive drilling is regarded as the most effective method for excavation, tunneling, and shallow well boring in the hard rock such as granite. However, its efficiency has been questioned in some specific environments and applications such as drilling for geothermal energy, where bores as deep as 5000 m are needed to reach the desired temperature zone. It is therefore understandable that attempts to drill bores that deep can face significant difficulties, and even though these difficulties have already been overcome by developing new techniques for deep drilling, there still are no replacement for the percussive drilling technique. The reason for this situation can be found in the shortage of technological readiness and in the nature of the rock and its behavior itself. However, in the previous attempts to find a replacement for percussive drilling, not enough of attention has been paid to altering the rock’s properties before drilling for example by using a thermal shock.

The dynamic indentation tests were performed to study the effects of heat shocks in situations similar to percussive drilling. The tests were performed using both single and triple button indenters. Even though the direct measurements of the bit-rock interactions obtained from the stress waves are useful, they do not provide any information about the side chipping and chipping between the indenters. Therefore, optical profilometry was used to study the craters formed during the impacts, and the concept of destruction work was used to characterize the effects of the heat shocks on the material removal during dynamic indentation. The results imply that after applying the heat shock, the extent of material removal increases even though the force levels are not affected much. This means that the efficiency of the indentation processes cannot be evaluated only by using the force-displacement curves but additional analysis such as the ones used in this work are needed.