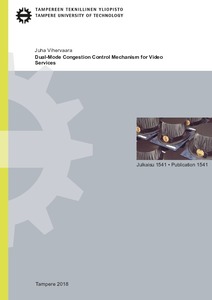 The behavior of the new mechanism and its friendliness toward itself, and the TCP protocol, have been investigated by means of simulations and real network tests. It was found that this kind of congestion control approach could be suitable for video services. The new mechanism worked acceptably. In particular, the mechanism behaved toward itself in a very friendly way in most cases. The averaged TCP fairness was at a good level. In the worst cases, the faster connections received about 1.6 times as much bandwidth as the slower connections.