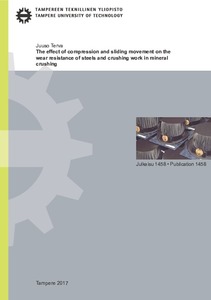 The movement pattern of the jaws is an important factor in the efficiency of crushing. Compressive motion is needed to crush the rock, whereas lateral motion is desired as it helps the ﬂow of the aggregate through the crusher and increases the capacity. In a jaw crusher, a ﬂywheel is used to store kinetic energy to turn the eccentric axle, which applies the motion to the jaw. The amount of work consumed in each compression cycle depends on the movement pattern of the jaw as well as on the mechanical properties of the crushed mineral. Part of the work is also consumed by the friction of the crushing mechanism, by the plastic deformation of the crushing contacts, and by the crushing of the aggregates.

This thesis concentrates on studying how the movement pattern of the jaw crusher affects the wear of the jaw plates and the work consumed in the crushing and wear processes. A new test equipment, the dual pivoted jaw crusher (DPJC), was designed and manufactured to make the study possible. The DPJC is a laboratory sized jaw crusher, which allows changes in the relation between the compressive and lateral movements of the jaw. It also has a modular jaw structure, which enables changing of the geometry of the crushing cavity. The thesis concentrates on determining how the parameters of the crushing equipment affect the wear and work done in the tests with high manganese and tool steel specimens.

The results of the tests show that there is a linear relationship between the wear of the specimens and the work done in the test. Also, when the movement pattern of the jaws is changed, the increase of the lateral motion increases the wear of the specimens and the total work done in the test. The DPJC was shown to be a versatile tool for wear research, causing extensive deformation and wear in the jaw plate materials, and having the ability to work harden also austenitic manganese steels. Carbide reinforced tool steels are known for their good wear resistance under compression, but with increasing lateral motion of the jaw plates they were observed to be susceptible to shear localization, which can decrease their wear performance. In addition to wear testing, the DPJC equipment can be used for comminution testing of minerals.