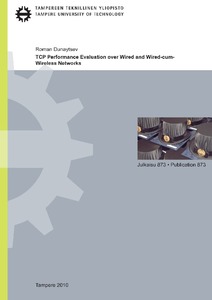 A fundamental design principle of the Internet is best effort packet delivery. The term "best effort" means that the network will do its best to deliver packets, but without any guarantees. In other words, if a problem occurs, the data are discarded. As long as most Internet applications and services require error-free data delivery and proper sequencing, providing reliable transmission of data from source to destination has become an important issue in the Internet. It is worthwhile to note that error control mechanisms, implemented at the lower layers of the protocol stack, cannot fully replace end-to-end error control, since the end-to-end functionality cannot be achieved in a hop-by-hop manner. The Transmission Control Protocol (TCP), a transport layer protocol, provides transparent transfer of data between application layer entities and releases them from any concern with the detailed way in which reliable delivery of data is achieved. To provide reliability, TCP detects errors or lost data and triggers retransmission until the data are correctly and completely received. TCP is also responsible for ensuring that the sending rate is appropriate for the capabilities of the receiving host (flow control), as well as avoiding introducing too much data into the network, which could cause buffers in some bottleneck routers to overflow and start dropping packets (congestion control). This is done by regulating the rate at which the sending host transmits data. It should be emphasized that the current stability of the Internet mainly depends on TCP congestion control mechanisms, while various queue management algorithms, implemented in routers, are helpful but play a less crucial role in practice. Due to such benefits as end-to-end error control and rate adaptation, TCP is heavily used throughout the Internet: about 90% of today's Internet traffic is carried by TCP.
Since TCP controls the vast majority of bytes and packets transmitted over the Internet, predicting TCP behavior and optimizing its performance is extremely important for satisfying user needs and providing quality of service in the Internet. In protocol analysis and design, analytical modeling has proven to be a powerful and cost-effective tool for studying the behavior of a communication protocol across the entire parameter space of different operating conditions and protocol parameter settings. Therefore, the research presented in this thesis is concentrated on improving the existing analytical models and developing new ones. The first part of the thesis is focused on analytical modeling of TCP performance in wired networks, capturing various aspects of TCP behavior in different scenarios. The second part is dedicated to TCP performance modeling in wired-cum-wireless networks. The developed models provide a general framework for TCP performance evaluation in a wide range of environments and conditions.