Enhancement of in situ remediation of hydrocarbon contaminated soil 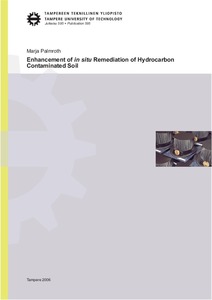 Approximately 750 000 sites of contaminated land exist across Europe. The harmful chemicals found in Finnish soils include heavy metals, oil products, polyaromatic hydrocarbons (PAHs), polychlorinated biphenyls (PCBs), chlorophenols, and pesticides. Petroleum and petroleum products enter soil from ruptured oil pipelines, land disposal of refinery products, leaking storage tanks and through accidents. PAH contamination is caused by the spills of coal tar and creosote from coal gasification and wood treatment sites in addition to oil spills. Cleanup of soil by bioremediation is cheaper than by chemical and physical processes. However, the cleaning capacity of natural attenuation and in situ bioremediation is limited. The purpose of this thesis was to find feasible options to enhance in situ remediation of hydrocarbon contaminants. The aims were to increase the bioavailability of the contaminants and microbial activity at the subsurface in order to achieve higher contaminant removal efficiency than by intrinsic biodegradation alone. Enhancement of microbial activity and decrease of soil toxicity during remediation were estimated by using several biological assays. The performance of these assays was compared in order to find suitable indicators to follow the progress of remediation.


Phytoremediation and chemical oxidation are promising in situ techniques to increase the degradation of hydrocarbons in soil. Phytoremediation is plant-enhanced decontamination of soil and water. Degradation of hydrocarbons is enhanced in the root zone by increased microbial activity and through the detoxifying enzymes of plants themselves. Chemical oxidation of contaminants by Fenton s reaction can produce degradation products which are more biodegradable than the parent compounds. Fenton s reaction and its modifications apply solutions of hydrogen peroxide and iron for the oxidation of organic chemicals. The cost of oxidation can be reduced by aiming at partial instead of full oxidation of contaminants and by integrating the process to biological treatment, in which the formed degradation products can be biodegraded.


Phytoremediation was used to remove fresh and aged petroleum hydrocarbons from soil, and modified Fenton s reaction combined with biodegradation was used to remove aged creosote oil from soil. The effects of hydrocarbon aging, different plant species and soil amendments on the removal efficiency were studied in phytoremediation experiments. Lab-scale experiments were made with fresh diesel fuel, and a field study was made with aged hydrocarbons deriving from diesel fuel and lubricants. The used plant species were pine, poplar, a grass mixture and a legume mixture. The experiments with modified Fenton s treatment were carried out in soil columns, to which concentrated H2O2 was added simulating in situ injection. Iron was not added since the soil was rich in iron. After Fenton s treatment, the soil was incubated in serum bottles to determine the effects on bioavailability of PAHs by modified Fenton s oxidation and to simulate the potential of intrinsic remediation. In addition to hydrocarbon analyses, the effects of both methods on soil microbial activities and toxicity were determined.


Chemical oxidation removed more PAHs (up to 50 %) than incubation of aged creosote contaminated soil (up to 34 %). Combined use of modified Fenton s reagent and incubation slightly improved PAH removal from the aged creosote oil contaminated soil, resulting in PAH removal of up to 59 %. Part of the removal during incubation was due to oxidation by residual H2O2 remaining in the soil. Hydrogen peroxide addition increased the toxicity of soil and leachate to Vibrio fischeri and decreased the number of bacterial cells in soil. The number of intact cells increased during incubation. The removal of PAHs was independent of whether the initial hydrogen peroxide concentration was 12 % or 30 %. However, bacterial survival was higher and regrowth faster at 12 % H2O2 than at 30 % H2O2. Carbon dioxide was produced and oxygen was consumed, even in soil treated with 30 % H2O2. The ability of soil bacteria to utilise PAHs as a carbon source was decreased, but not completely removed, by .modified Fenton s treatment. The activity of extracellular acetate esterase decreased with the addition of H2O2, but it increased again during incubation to levels preceeding H2O2 addition or higher. Based on toxicity and microbial activity results, the initial hydrogen peroxide concentration of 12 % is recommended instead of 30 %. This study shows that the bioaugmentation often applied in other studies after oxidative treatment step is unnecessary.


Contaminant utilisation assays were suitable indicators to monitor the progress of phytoremediation and modified Fenton s treatement combined to intrinsic remediation. Suitability of toxicity indicators need to be determined for each soil prior to using them to monitor remediation. Soil metabolic activity and microbial number assays are secondary to contaminant utilisation assays in the monitoring of remediation process. However, they should be used to compare soil microbiological activity before and after soil remediation.