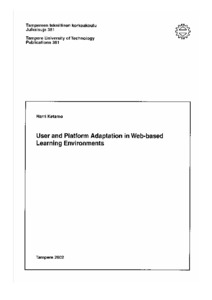 The aim of this thesis is to provide new empirical knowledge and case solutions to the domain of user and platform adaptive learning environments. The studies of the thesis were based on reviews of literature, technological development and empirical studies. The empirical studies were done in controlled situations during the years 2000-2002. The empirical data was analyzed using quantitative and qualitative methods. All software described in this thesis was written especially for research purposes in order to ensure the efficient collecting of observation data.


In the first study PDA s and PC s are compared in order to find out empirical knowledge for platform adaptive learning environments. The clearest result was that the touch screen PDA s enable more effective human-computer interactions than the touch screen of PC s or the use of a mouse. Technological use of PDA s was also easy to learn. Contrarily, readability in the PDA platforms was poor.


A user behavior adaptive learning tool (Adaptive Geometry Game) was developed and studied empirically in this thesis. The game was empirically tested on a PDA platform and it seemed to work well. Over 60% of the pupils reached the higher skill group after playing the game. What is more important, all the low skill pupils reached average skills in geometry after playing the game. The rules for optimizing the learning outcome were discovered with careful observation of the learning situation in the first stage of the study. According to this study, when developing the user behavior adaptive system we should first focus on the elements or factors we plan to observe.


A web-based platform adaptive group working environment, xTask, was implemented for this thesis. xTask was used in the empirical study, the aim of which was to find out differences in using processes between PDA and PC platforms. In this study the use of a PDA platform was approximately 20% of all use. PDA s were used mostly for reading documents and giving short answers to group members while most writing was done with PC s. Different use of platforms did not explain anything about learning outcomes. Encouraging and supporting processes in groups could have explained learning outcomes.