Solar Fuels and Chemicals: Engineering Bacterial Platform for the Production of Long-Chain Hydrocarbons from Carbon Dioxide and Electricity 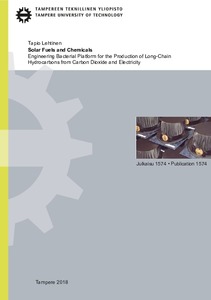 Microbial synthesis of long-chain hydrocarbons is considered a promising method for the production of drop-in replacements for the currently utilized fossil fuels and chemicals. In a sustainable future, the carbon and energy required for the synthesis of these compounds should be ultimately derived from carbon dioxide (CO2) and the sun. Additionally, the produced compounds should be of similar or higher quality than the fossil counterparts they aim to replace, enabling their utilization directly in the existing processes and infrastructure. Solar energy can be efficiently captured by man-made devices, and converted to electricity. Some microbes are capable of utilizing the electrical energy for the reduction of CO2 into organic molecules, while other microbes hold the potential for the specific production of long-chain hydrocarbons. However, these two processes are difficult to achieve efficiently in any single organism, owing to their contrasting requirements for the host cells’ metabolism.

In this study, a two-stage bacterial platform for the production of long-chain hydrocarbons from carbon dioxide was developed. In the first stage, acetogenic bacteria produce acetate from carbon dioxide and electricity as the sole sources of carbon and energy. In the second stage, the acetate is converted to long-chain hydrocarbons by a second bacterium, Acinetobacter baylyi. The platform is modular in nature, and different acetate-producing and -consuming processes can be combined. The final product can be determined and the production enhanced by genetically engineering A. baylyi.

The development of efficient production strains by metabolic engineering is restricted by the lack of sensitive and specific measurement methods for the target compounds. Intracellular biosensors may offer convenient means for high-throughput screening and optimization of the production strains. In order to study heterologous alkane biosynthesis in A. baylyi, an in vivo alkane biosensor working on two levels was developed. First, a gene encoding the green fluorescent protein (GFP) was placed under an alkane-inducible promoter, linking the alkane production to the expression of GFP. The second level is provided by a constantly expressed bacterial luciferase LuxAB, which utilizes the fatty aldehyde intermediate as a substrate in a reaction that produces visible light. Thus, the production of fatty aldehydes can be monitored with the luminescence signal. The two-level configuration of the sensor enabled the screening of different alkane-producing pathways, and the optimization of the expression levels of the pathway enzymes in order to improve the alkane biosynthesis in A. baylyi.