Role of municipalities in water services 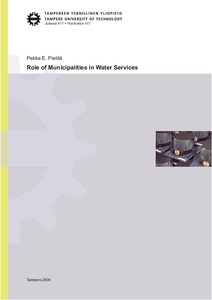 Water is a basic requirement for all human activity. In the early days of human history people had to settle in areas where water was available. Later on, technologies were developed to transfer water over distances to enable permanent habitation of areas suffering from a lack of water. When population centres expanded and ever more water was supplied to them, the problem of wastewater became more serious. Urban streams were transformed into drainage canals, more ditches and channels were built in towns, and the drainage channels also served as sewers to convey liquid waste away from the residential areas. When piped water systems were introduced, and flush toilets became more common, the need to build proper sewers became acute.


The main objective of this research is to analyse the role of municipalities in water and wastewater services in a number of European countries. The countries subjected to closer scrutiny are Finland, Sweden, Lithuania, Germany, Netherlands, France and England. The selection of just these countries was not intended to present the average situation in Europe but rather to demonstrate the variety of practices even within the limited area of Northern and Central Europe they cover. The research concentrates on Finland, the researcher s native country, where he is more familiar with the factors underlying people s and organisations behaviour.


Water and wastewater services in Finland are, according to international comparisons, exceptionally well organised. In Finland, as in industrialised countries in general, the public sector and particularly the municipalities have played a central role in the development of these services. However, the world is changing and the public sector is facing financial difficulties everywhere. One of the key questions is whether public sector organisations can perform their tasks in the future.


This research looks at water and wastewater services as multi-dimensional activities within a wider institutional context considering the role of all stakeholders of water services. The research draws inputs from a wide range of activities the author has been involved in during the last ten years in some cases even longer. Action research was the predominant research approach. The summary article is based not only on the four mentioned peer-reviewed articles but also on a number of other peer-reviewed or non-peer-reviewed articles, conference and workshop presentations, research activities including theses supervision and involvement in working groups, professional associations and advisory assignments.


This research effort clearly showed that there is no single model or formula for how water and wastewater services should be organised not even within a single country. Even though municipalities are typically legally responsible for water and wastewater service provision, they do not have to produce these services themselves, and there are several alternatives for producing the services. For instance, municipal water undertakings widely use the services of private companies and outsource certain operations and activities. The respective arrangements should take into account not only economical and technical factors but also local participation, priorities and traditions, etc.


In Finland, there are large rural areas not covered by municipal water and wastewater undertakings, where people have to arrange the services themselves. A common solution has been for people to join forces and establish a cooperative. The tightening of wastewater treatment requirements in recent years has hastened the establishment of wastewater cooperatives. One of the challenges for the future is how to make cooperation between municipal water and wastewater undertakings, cooperatives and other actors as smooth and efficient as possible.