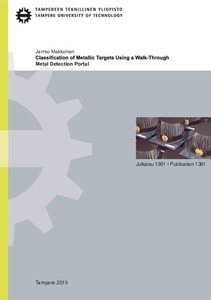 Metal detectors have been used for a long time for treasure hunting, security screening, and ﬁnding buried objects such as landmines or unexploded ordnance. Walk-through metal detection (WTMD) portals are used for making sure that forbidden or threatening metallic items, such as knives or guns, are not carried into secure areas at critical locations such as airports, court rooms, embassies, and prisons.

The 9/11 terrorist act has given rise to stricter rules for aviation security worldwide, and the ensuing tighter security procedures have meant that passengers face more delays at airports. Moreover, the fear of terrorism has led to the adoption of security screening technology in a variety of places such as railway and coach stations, sports events, malls, and nightclubs.

However, the current WTMD technology and scanning procedures at airports require that all metallic items be removed from clothing prior to scanning, causing inconvenience. Furthermore, alarms are triggered by innocuous items such as shoe shanks and artiﬁcial joints, along with overlooked items such as jewellery and belts. These lead to time- consuming, manual pat-down searches, which are found inconvenient, uncomfortable, and obtrusive by some.

Modern WTMD portals are very sensitive devices that can detect items with only small amounts of metal, but they currently lack the ability to further classify the detected item. However, if a WTMD portal were able to classify objects reliably into, e.g., “knives”, “belts”, “keys”, the need for removing the items prior to screening would disappear, enabling a paradigm shift in the ﬁeld of security screening.

This thesis is based on novel research presented in ﬁve peer-reviewed publications. The scope of the problem has been narrowed down to a situation in which only one metallic item is carried through the portal at a time. However, the methods and results presented in this thesis can be generalized into a multi-object scenario. It has been shown that by using a WTMD portal and the magnetic polarisability tensor, it is possible to accurately distinguish between threatening and innocuous targets and to classify them into 10 to 13 arbitrary classes. Furthermore, a data library consisting of natural walk-throughs has been collected, and it has been demonstrated that the walk-through data collected with the above portal are subject to phenomena that might aﬀect classiﬁcation, in particular a bias and the so-called body eﬀect. However, the publications show that, by using realistic walk-through data, high classiﬁcation accuracy can be maintained regardless of the above problems. Furthermore, a self-diagnostics method for detecting unreliable samples has also been presented with potential to signiﬁcantly increase classiﬁcation accuracy and the reliability of decision making.

The contributions presented in this thesis have a variety of implications in the ﬁeld of WTMD-based security screening. The novel technology oﬀers more information, such as an indication of the probable cause of the alarm, to support the conventional screening procedure. Moreover, eliminating the need for removing all metallic items prior to screening enables design of new products for scenarios such as sports events, where conventional screening procedures might be inconvenient, creating thus new business possibilities for WTMD manufacturing companies.

The positive results give rise to a variety of future research topics such as using wideband data, enabling simultaneous classiﬁcation of multiple objects, and developing the portal coil design to diminish signal nonlinearities. Furthermore, the ideas and the basic principles presented in this thesis may be applied to other metal detection applications, such as humanitarian demining.