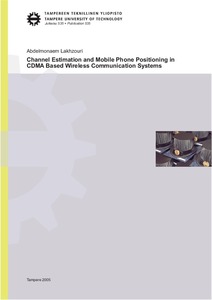 
Lakhzouri, A.
Tampere University of Technology

One of the most popular techniques for accurate mobile positioning is based on the Time of Arrival (TOA) as a ranging metric. The accuracy of measuring the distance using TOA is sensitive to the multipath condition between the mobile station and the network access point. Generally speaking, multipath delays caused by distant reflectors have a relatively large delay spread, with more than one chip interval between different paths. Paths may also arrive at sub-chip delay intervals, generating closely spaced multipaths that introduce significant errors to the Line-Of-Sight (LOS) path delay and gain estimation. In 3G mobile communication systems where the Code Division Multiple Access (CDMA) technique is used as multiple access method, the need to estimate different arriving paths is a crucial task not only for the proper functioning of the CDMA receivers, but also for different emerging applications based on mobile phone positioning.


When the radio signal is transmitted through a wireless channel, the wave propagates through a physical medium and interacts with physical objects and structures, such as buildings, hills, trees, moving vehicles, etc. The propagation of radio waves through such an environment is a complicated process that involves diffraction, refraction, and multiple reflections. Therefore, the mobile channel can be divided into LOS signal and Non-Line of Sight (NLOS) components depending on the physical obstruction between the transmitter and the receiver. Also, the speed of the mobile impacts how rapidly the received signal level varies as the mobile terminal moves.


The results presented in this thesis are focused around three main themes. The first theme considers the development of signal processing techniques for channel estimation in downlink Wide-band CDMA (WCDMA) system. The estimation of both delays and channel coefficients of all detectable paths is considered. Many of the studied algorithms are derived from the Maximum-Likelihood (ML) theory. Nevertheless, these algorithms can be classified into two categories. The first one is based on the Bayesian theory where prediction and estimation stages are used such as the case of Kalman filtering based algorithms. The second category is based on a feedforward approaches such as the deconvolution methods, and the nonlinear operator based estimation. The scenarios of overlapping paths are emphasized and several solutions are presented to treat this situation. Enhancement of the estimation of the first arriving path via interference cancellation schemes is also discussed.


The second theme treats the problem whether the first estimated arriving path corresponds to the LOS or NLOS component. Here different approaches are used. First, the channel-statistics-based decision is explored. This approach uses the history of the range measurements to draw the amplitude distribution of the first arriving path. The second approach is based on estimating the Rician distribution parameters.


The third theme considers the analysis of real measurement data collected in typical urban environment. This part is tended to the understanding of the mobile channel behavior when mobile positioning applications is kept as the key issue.


The first part of this thesis is dedicated to signal processing algorithms for channel estimation in downlink WCDMA systems. In this part two classes of algorithms are presented. The first one is based on the feedback approach where Kalman filtering theory is extensively used. The focus here is on the joint estimation of multipath delays and complex channel coefficients. The second class of algorithms is based on the feedforward approach where different algorithms such as the deconvolution algorithms are presented and studied. Here the focus is more on the multipath delay estimation and on the impact of bandlimiting pulse shapes, such as the Root Raised Cosine (RRC) filter used in WCDMA system. These techniques are also used for deriving different schemes for interference cancellation, which help in resolving the multipath components. In this part, several important enhancements to existing algorithms are introduced, and the performance of different channel estimation methods are investigated in the WCDMA downlink context, where the RRC pulse shaping poses difficult challenges to accurate channel estimation.


The second part of this thesis is directly related to the mobile positioning applications, where the delay of the direct line-of-sight signal is generally used to compute the mobile position. Here, two important topics are investigated. The first one is related to LOS detection based on the link-level channel estimation between the Mobile Station (MS) and the Base Station (BS). Two novel techniques are presented to decide whether the first arriving path is the LOS or NLOS component. The second topic is the analysis of real measurement data collected in typical urban environment, that can be helpful for choosing the positioning methods in cellular systems.


The thesis includes a collection of eight original publications that contain the main results of the author s research work.