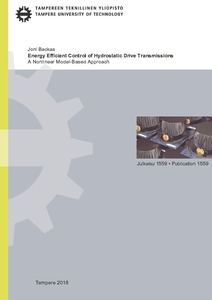 The high standard of living in industrial countries is based on the utilization of machines. In particular, the tasks performed with hydraulic work machines (HWMs) are essential in numerous industrial fields. Agriculture, mining, and construction are just a few examples of the lines of business that would be inconceivable today without HWMs. However, rising oil prices and competing technologies are challenging the manufacturers of these machines to improve their fuel economy.

Despite the fact that energy efficiency research of hydraulic systems has been active for more than a decade, there seems to be a significant gap between industry and academia. The manufacturers of HWMs have not adopted, for example, novel system layouts, prototype components, or algorithms that require powerful control units in their products.

The fuel economy of HWMs can be increased by utilizing system information in control algorithms. This cost-effective improvement enables operation in challenging regions and closer to the operating boundaries of the system. Consequently, the information about the system has to be accurate. For example, reducing the rotational speed of the engine has proven effective in improving the energy efficiency, but it increases the risk of even stalling the engine, for instance in situations where the power generation cannot meet the high transient demand. If this is considered in the controller with low uncertainty, fuel economy can be improved without decreasing the functionality of the machine.

This thesis studies the advantages of model-based control in the improvement of the fuel economy of HWMs. The focus is on hydrostatic drive transmissions, which is the main consumer of energy in certain applications, such as wheel loaders.

We started by developing an instantaneous optimization algorithm based on a quasi-static system model. The control commands of this fuel optimal controller (FOC) were determined based on cost function, which includes terms for fuel economy, steady-state velocity error, and changes in the control commands.

Although the use of quasi-static models is adequate for steady-state situations, the velocity tracking during transients and under load changes has proven to be inadequate. To address this issue, a high-performance velocity-tracking controller was devised. Full state feedback was assumed, and we resorted to a so-called D-implementation, which eliminates, for example, the need for the equilibrium values of pressure signals. The nonlinearities of the system were considered with the state-dependent parameters of the linear model.

In the next step, a nonlinear model predictive controller combined fuel economy control and velocity tracking. To the best of the author’s knowledge, this is the first time that the model predictive control scheme has been utilized with such a detailed system model that also considers the hydraulic efficiencies and torque generation of the engine. This enables utilizing the controller as a benchmark of control algorithms for non-hybrid hydrostatic drive transmissions that do not require information about the future.

The initial tests of all the controllers were conducted with a validated simulation model of a research platform machine, a five-ton municipal tractor. In addition, the FOC and velocity-tracking controller were implemented into the control system of the machine. The practical worth of the FOC was proven with a relatively unique field experiment set-up that included, for example, an online measurement system of fuel consumption and autonomous path following. The fuel economy improved up to 16.6% when compared with an industrial baseline controller. The devised velocity-tracking concept was also proven as a significant reduction of error was observed in comparison with classic literature solutions, namely state feedback and proportional-integral-derivative controllers.