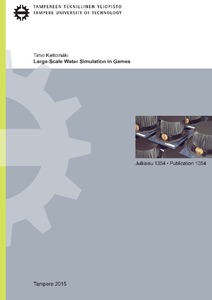 Water is an important element in the nature. It is also often encountered in digital games and other virtual environments, but unfortunately interaction with it is typically very limited. The main reason for this is probably the immense computational cost of simulating water behavior. Simulating water and other fluids by numerically solving emph{Navier-Stokes equations} is commonplace for offline engineering applications such as bridge building, weather prediction, or aeronautics. Since the 1990s, these methods have also been applied to computer graphics, but the focus has been in offline applications such as movie special effects. Recent advances in programmable graphics hardware have facilitated real-time fluid simulation in a large enough scale to be applicable in games. This far these methods have been mostly used in games only for visual purposes. This thesis is motivated by the wish to see more games where also the gameplay is affected by water simulation.

The first part of this thesis studies the roles of interactive water in different kinds of games. Requirements for water simulation methods are formulated by examining those roles. The thesis then introduces some background theory and various methods for water simulation. The focus is in heightfield-based methods, which simplify the problem by assuming that the water surface can be represented as a vertical displacement from a neutral level. This assumption allows very large amounts of water to be simulated with the very limited resources available for this purpose in a typical game. Most of these methods work on a heightfield terrain and can be enriched with fully 3D effects such as splashes and waterfalls by adding a particle simulation system.

An important problem is coupling the water simulation with existing rigid body simulations that are largely used for the dynamics of game objects. The coupling includes effects such as floating, objects moving with the flow, and building dams out of bodies. The thesis introduces a new heightfield-based coupling method, which allows the building of dams from rigid bodies in the heightfield context, unlike the previous approaches. The proposed methods, including the underlying water simulation method and visualization, were implemented in parallel using graphics processing units. The methods were found to be fast enough to be applicable in games.

Finally, the most promising current simulation methods are compared from a games point-of-view using the criteria set in the beginning: performance, simplicity, visual quality, richness of behavior, and rigid body coupling. Since quality of experience is a subjective matter, user tests are recommended for comparison. Included in the thesis is one of the first such studies, which found out that leaving out the velocity self-advection step of a shallow water equation solver had no statistically significant effect on any of the measured psychological impacts. Based on the analysis, recommendations for the choice of simulation methods are given for different kinds of games.