Synthesis and Function of Photoactive Donor−Acceptor Systems of Bay-Functionalized Perylene Diimide Dyes in View of 1,7- and 1,6-Regioisomers 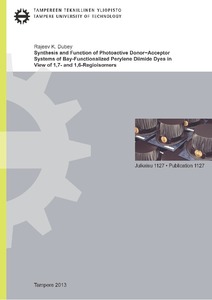 A new series of donor−acceptor based ensembles, consisting of phenoxy or pyrrolidinyl functionalized perylene diimide covalently linked to Ru(II) polypyridine complex, has been synthesized and studied in detail by steady-state and time-resolved spectroscopy. In all the ensembles, the photoexcitation of either chromophore resulted in a long-lived triplet excited state of PDI (3PDI) as the final excited state, but the photochemical reactions leading to the triplet states were found to be essentially different for the two types of the ensembles. In the case of phenoxy-PDI based ensemble, the excitation of either chromophore leads to the electron transfer from the Ru(II) complex to PDI; whereas for the pyrrolidinyl-PDI based ensembles, the electron transfer is observed in opposite direction and only when the Ru(II) complex is excited. Finally, a dibenzo[a,c]phenazine molecule was coupled with fullerene to function as light-harvesting antenna in order to overcome poor absorption strength of fullerene in the visible spectral region. The suitability of the synthesized dibenzo[a,c]phenazine−fullerene dyad, for the photovoltaic applications, has been examined by detailed electrochemical and spectroscopic study.