Capability-based adaptation of production systems in a changing environment 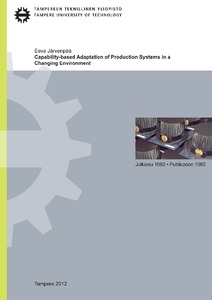 Today’s production systems have to cope with volatile production environments characterized by frequently changing customer requirements, an increasing number of product variants, small batch sizes, short product life-cycles, the rapid emergence of new technical solutions and increasing regulatory requirements aimed at sustainable manufacturing. These constantly changing requirements call for adaptive and rapidly responding production systems that can adjust to the required changes in processing functions, production capacity and the distribution of the orders. This adaptation is required on the physical, logical and parametric levels.
Such adaptivity cannot be achieved without intelligent methodologies, information models and tools to facilitate the adaptation planning and reactive adaptation of the systems. In industry it has been recognized that, because of the often expensive and inefficient adaptation process, companies rarely decide to adapt their production lines. This is mainly due to a lack of sufficient information and documentation about the capabilities of the current system and its lifecycle, as well as a lack of detailed methods for planning the adaptation, which makes it impossible to accurately estimate its scale and cost. Currently, the adaptation of production systems is in practice a human driven process, which relies strongly on the expertise and tacit knowledge of the system integrators or the end-user of the system.
This thesis develops a capability-based, computer-aided adaptation methodology, which supports both the human-controlled adaptation planning and the dynamic reactive adaptation of production systems. The methodology consists of three main elements. The first element is the adaptation schema, which illustrates the activities and information flows involved in the overall adaptation planning process and the resources used to support the planning. The adaptation schema forms the backbone of the methodology, guiding the use of other developed elements during both the adaptation planning and reactive adaptation. The second element, which is actually the core of the developed methodology, is the formal ontological resource description used to describe the resources based on their capabilities. The overall resource description utilizes a capability model, which divides the capabilities into simple and combined capabilities. The resources are assigned the simple capabilities they possess. When multiple resources are co-operating, their combined capability can be reasoned out based on the associations defined in the capability model. The adaptation methodology is based on the capability-based matching of product requirements and available system capabilities in the context of the adaptation process. Thus, the third main element developed in this thesis is the framework and rules for performing this capability matching. The approach allows automatic information filtering and the generation of system configuration scenarios for the given requirements, thus facilitating the rapid allocation of resources and the adaptation of systems. Human intelligence is used to validate the automatically-generated scenarios and to select the best one, based on the desired criteria.
Based on these results, an approach to evaluating the compatibility of an existing production system with different product requirements has been formulated. This approach evaluates the impact any changes in these requirements may have on the production system. The impact of the changes is illustrated in the form of compatibility graphs, which enable comparison between different product scenarios in terms of the effort required to implement the system adaptation, and the extent to which the current system can be utilized to meet the new requirements. It thus aids in making decisions regarding product and production strategies and adaptation.