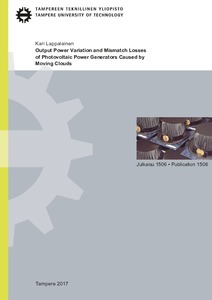 Photovoltaic (PV) systems are affected by irradiance fluctuations, mainly caused by overpassing cloud shadows, suffering from fluctuating output power. With high PV penetration levels, these fluctuations can lead to power system instability and problems in power quality. Further, overpassing cloud shadows cause partial shading (PS) which is the main cause of mismatch losses in PV systems. Mismatch losses occur in every PV system when interconnected PV cells have different electrical characteristics at a specific instant. Mismatch losses are mainly caused by PS but also by other differences in the operating conditions of PV modules, module damages and manufacturing tolerances. Moreover, PS can lead to failures in maximum power point tracking thereby causing extra losses.