Light, Shape and Space: Direct and Inverse Problems of Individual Objects and Populations 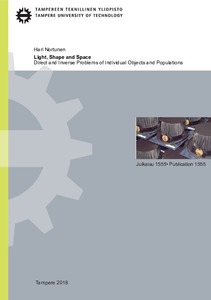 In this thesis, we examine two case studies. The ﬁrst case studies how the shape of a celestial body inﬂuences an effect caused by light, while the second case analyzes how the light, in the form of brightness measurements, can give us information about the shapes of celestial bodies. In the ﬁrst problem, we discuss an effect where sunlight produces a torque that affects the rotational dynamics of small bodies. The effect was named YORP, after its observers Yarkovsky, O’Keefe, Radzievskii and Paddack. We derive analytical formulas for the YORP torques and a new quantity that expresses the maximum YORP effect caused by the sunlight for a given shape. We called this quantity YORP capacity. In addition, we estimate the upper bound of the YORP capacity, showing how it is theoretically unbounded, but for practical shapes, there is an approximate, ﬁnite upper bound. We also study the stability of the YORP effect against noise in the shape model, discovering that the absolute change in YORP capacity remains small with minor shape perturbations, but the relative change becomes large if the YORP capacity was initially small. Analyzing the shape models found in an asteroid database, we discovered that a majority of the shapes is unstable against shape perturbations, while a fraction of the shapes is semistable. The former case may explain why astronomers have obtained completely different results on the YORP effect when using shapes with different resolutions. All of the aforementioned are new results in the ﬁeld of YORP research.

In the second case, we study an inverse problem where the quality of the data, given as time series, is so weak that it is no longer possible to reconstruct a model for an individual target. Therefore, rather than examining single targets, we focus on a large population of targets, and attempt to obtain information on the population. That is, we attempt to reconstruct a population-wide model. The characteristics of the population are described with a distribution function. This approach is completely new in the ﬁeld of inverse problems. We discuss the forward model and the inverse problem, showing that even with weak data and a crude model, it is possible to obtain a unique joint distribution that gives us information about our two parameters, shape elongation and spin latitude. The accuracy of the solution is rough, but brings out the information that can be recovered from the data, and the distribution method is tolerant to data and model noise. We introduce some applications of the distribution method, such as a synthetic simulator for estimating the accuracy of the obtained solution, and some ways to measure the differences between the distributions obtained for different populations. In addition, we developed a software package that implements the distribution method and the above-mentioned applications on a user-given asteroid database. The software package can be used for experimenting with different populations, and inspecting different hypotheses or correlations. For example, we conﬁrmed a previous study that the YORP effect has a noticeable effect on the distribution of spin latitudes on a speciﬁc asteroid family.