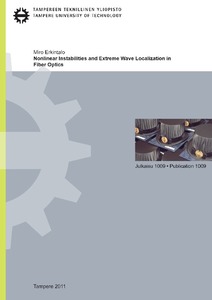 Modulation instability and the existence of localized soliton structures are central phenomena of nonlinear systems governed by the focusing nonlinear Schrödinger equation such as Bose-Einstein condensates, plasmas and fluids. Yet their systematic study is often difficult because of the hostility of the associated environments towards direct controllability. Optical fibers, on the other hand, provide a mature technology where the controlled exploration of many fundamental effects is made possible. In this work we report on experimental, numerical and analytical studies of novel modulation instability and wave localization dynamics in optical fibers.

Modulation instability can be described in terms of exact analytical solutions of the nonlinear Schrödinger equation known as Akhmediev breathers. Such an analytical approach has, however, remained largely unnoticed in the context of optical fibers where approximative or purely numerical methods have been preferred. In this work we use the breather formalism to derive a general recipe for the generation of ultra-high repetition rate pulse trains from an initially weakly modulated field. We also describe a simple method to excite a nonlinear superposition of elementary instabilities. Such higher-order dynamics are verified experimentally and shown to be analytically describable with the mathematical method of Darboux transformation.

Soliton dynamics play a tremendous role in the spectacular phenomenon of fiber supercontinuum generation where narrowband laser light injected into a highly nonlinear fiber is transformed into a broad spectral continuum. In this work we present two novel soliton-related mechanisms that can contribute to the extent of the supercontinuum spectrum. Specifically, we show experimentally and numerically that the spontaneous nonlinear interaction of solitons with each other or with the residues of the input pump pulse can lead to the generation new frequency components.

The initial stages of long-pulse supercontinuum generation can be described in terms of noise-driven modulation instability, leading to the break-up of the temporally broad input pulse into a large number of interacting solitons. Significantly, this intrinsically noise-sensitive process has been shown to lead to the emergence of rare, abnormally redshifted solitons whose statistical characteristics resemble those of the infamous oceanic rogue waves. Here we show that such optical rogue wave fluctuations can be observed also in the regime of femtosecond supercontinua but that, in fact, the quantified fluctuations do not necessarily imply the existence of solitons with abnormally large peak power. We find, however, that collisions of solitons do lead to the emergence of extremely localized waves whose amplitudes fulfill criteria often used to discriminate rogue waves in a hydrodynamic environment. It is expected that the studies performed in the framework of this thesis will lay the foundations and stimulate further research in nonlinear science.