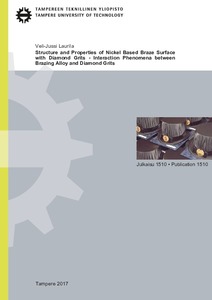 Diamond is known as the hardest material in the world. However, the diamond crystals found in nature are expensive and are mostly used for jewellery. In the middle of the last century, man learned how to produce single diamond crystals artificially on an industrial scale, which has dramatically reduced the cost of diamonds used in tool manufacturing. However, the size of these crystals is limited and if they are to be used as components in tools, they somehow have to be fixed to the tool body.

One popular way to affix diamonds to tools is to use brazing. Several types of brazing filler materials are used for this purpose. One group of these materials consists of low cost, nickel-based brazing materials to which chromium has been added to improve the mechanical strength and, especially, the corrosion resistance of the joint. Unfortunately the brazing temperature of these nickel-based alloys is high compared to the other brazing materials, and because of the high temperature and the effects of the chromium, the braze material reacts with the diamond, thus reducing the strength of the diamond crystals. Carbon also dissolves into the surrounding braze. Here it has to be remembered that the carbon also compose chromium carbides between the braze and the diamond crystals. These are needed to lower the contact angle between the braze and the diamond, and also to form a good mechanical bond between the diamond and the braze. This greatly improves the mechanical bond between the braze filler material and the diamond grit.

Two different kinds of nickel-based braze material were chosen for the studies to see what effects their composition has on the final structure existing between the braze and the diamond. The effect of the carbide formation when boron and silicon containing Ni-Cr-Si-B was used as the braze material was found to be slight compared to the Ni-Cr-P braze, despite the fact that the brazing temperature is clearly higher for the Ni-Cr-Si-B material. The reasons for this are not only the lower chromium content, but also the formation of chromium borides in the Ni-Cr-Si-B braze matrix. The chromium in the alloy does give good corrosion resistance but it has also been shown to decrease the mechanical strength of the diamonds because of the excess carbide formation. The braze filler materials studied here have been developed mainly for joining stainless materials and super alloys, such as those used in corrosive applications and at high temperatures.

In this study, it was found that the degradation mechanism for different types of diamond facets varies, which in turn affects the mechanical strength of the diamond when it is strained in different directions. According to the results of this work, it is clear that the higher the available chromium content, the thicker the carbide layer on the diamond surface, and thus there is considerable degradation of the diamond surface.

The cross-sections of the carbide layers between the diamond and braze were studied using Scanning Electron Microscopy (SEM) and Backscattered Electron (BSE) analysis. BSE-imaging together with the image analysis program used to measure the grey levels of the phases proved to be very efficient tools for characterizing the phases of the structure. This method is especially useful for identifying the different phases for the kinds of multiphase materials in which some of the components are electrically insulating.

The BSE-imaging confirmed that two different layers of carbides are formed between the diamond and the braze filler material, seen as contrasting lighter and darker phases, indicating the difference in the compositions of these carbides. There was no evidence of graphite formation, even though the braze materials contained nickel. The results of the research indicate that the deterioration of mechanical properties of the diamond composite may in part be caused by the degradation of the surfaces of the single diamond crystals.