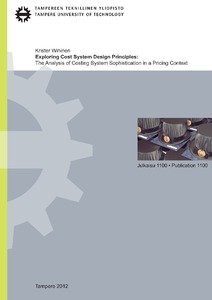 The structural characteristics of product costing systems are a highly researched area of management accounting. This research has placed great emphasis on those characteristics of costing systems that enable the generation of accurate product cost figures to support decision-making. It has been argued that improved pricing decisions can be made if the product costing system is capable of conveying a more truthful image of the resource consumption of products. However, there is little empirical evidence to indicate the type of mechanisms by which this impact is expected to occur. The objective of this study was to explore this commonly assumed relationship by attempting to better understand which factors affect the performance of costing systems. It was also analyzed as to whether these factors are bound to specific purpose(s) of use, basically implying that costing systems should be designed to support specific managerial tasks.
The study was conducted in three main parts. In the first of these, the concept of cost system sophistication, together with its underlying assumptions regarding the performance of costing systems, was analyzed. This culminated in the conceptual framework, which attempted to more comprehensively depict the various viewpoints that must be balanced in cost system design. The role of accuracy as a starting point for cost system design was especially challenged by borrowing information quality literature that highlights the need to pay more attention to the contextual and representational characteristics of information. In the second part, these conceptual arguments were further elaborated and illustrated through the empirical analysis of cost system redesign projects that were conducted in two case companies. The factors that make an impact on the perceived usefulness of costing systems were particularly analyzed and reflected in the reviewed literature. In the final part, it was examined as to whether the intended purpose of using costing systems to support pricing affected the requirements that were placed on the cost information.
The central finding of the study was that performance of costing system cannot solely be explained by referring to the accuracy of cost information. Different costing systems certainly convey different images of organizational life, but the issue of the sense in which they are more or less accurate, or better reflect the causal mechanisms of resources and cost objects, is highly debatable. Many organizational problems do not ultimately stem from poor intrinsic quality of cost information, but also from various contextual and representational factors that affect the possibilities of using and interpreting the information in a particular decision-making context. These requirements are also dependent on the specific purpose of use, implying that the performance of costing systems cannot be understood without paying attention to the manner in which they are actually used. One implication is that limited resources should not always be directed at reducing the distortions in cost figures, but rather at improving and tailoring the content of existing information to satisfying the contextual requirements of various decision-makers.