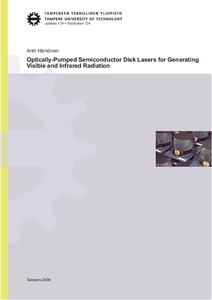 Optically-pumped semiconductor disk lasers are light sources that combine traditional solid state disk laser architecture with gain material made of semiconductor nano-layers. The laser design offers an attractive oppportunity to produce high-power, high-brightness
laser radiation at a wavelength that is controlled by semiconductor bandgap engineering. Moreover, the laser can be very compact, yet it can be mode-locked to produce ultrashort optical pulses or efficiently frequency-doubled to produce visible colors. Because of their advantageous characteristics, semiconductor disk lasers are highly interesting for a number of applications including laser projection, optical pumping, optical clocking and substitution of certain gas- and ion-lasers.

This thesis concerns the research and development of semiconductor disk lasers emitting at visible and infrared wavelengths. The semiconductor structures used in this work are based on InGaAs/GaAs, GaInNAs/GaAs and GaInSb/GaSb material systems. In particular, it was shown in this thesis that frequency-doubled dilute nitride GaInNAs disk lasers can be used to generate the high-power red emission that is preferred for display applications. Power scaling to the 1-W level and 100 nm wavelength tunability were demonstrated for a gallium antimonide based disk laser operating near 2 µm. The novel concept of an intracavity frequency-mixed dual-wavelength disk laser was proposed and
demonstrated in this thesis. The laser, operating at two infrared wavelengths near 1 µm, generated 130mWof aquamarine sum-frequency emission in total, suggesting good spatial and temporal overlap of the two near-infrared beams. Based on this observation it is reasonable to believe that efficient difference-frequency generation producing coherent emission at a mid-infrared wavelength could be possible in a similar laser in the future.