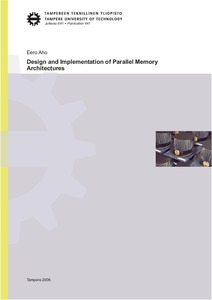 Parallel processing is continually concerned about how to supply all the processing nodes with data. Many of the applications favor special data patterns that could be accessed in parallel. This is utilized in parallel memories, where the idea is to increase memory bandwidth with several memory modules working in parallel and feed the processor with only necessary data.


Traditional parallel memories are application specific and support only fixed data access requirements. In this Thesis, memory flexibility is increased to give support for several algorithms by adding run-time configurability to parallel memories. Multitude of data access templates and module assignment functions can be used within a single hardware implementation, which has not been possible in prior embedded parallel memory systems. The design reusability of the memories is also improved since the same memory system is applicable in several separate implementations.


The results of this Thesis can be used for designing a flexible memory system for real-time multimedia applications that demand high data throughput and data parallel computation.