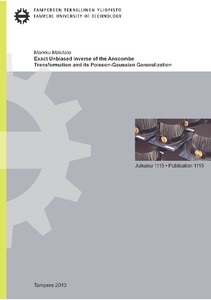 Digital image acquisition is an intricate process, which is subject to various errors. Some of these errors are signal-dependent, whereas others are signal-independent. In particular, photon emission and sensing are inherently random physical processes, which in turn substantially contribute to the randomness in the output of the imaging sensor. This signal-dependent noise can be approximated through a Poisson distribution. On the other hand, there are various signal-independent noise sources involved in the image capturing chain, arising from the physical properties and imperfections of the imaging hardware. The noise attributed to these sources is typically modelled collectively as additive white Gaussian noise. Hence, we have three common ways of modelling the noise present in a digital image: Gaussian, Poisson, or Poisson-Gaussian.

Image denoising aims at removing or attenuating this noise from the captured image, in order to provide an estimate of the underlying ideal noise-free image. For simplicity, denoising algorithms often assume the noise to be Gaussian, and ignore the signal-dependency. However, in an image corrupted by signal-dependent noise, the noise variance is typically not constant and varies with the expectation of the pixel value. Thus, for the removal of signal-dependent noise, we can either design an algorithm specifically for the particular noise model, or use an indirect three-step variance-stabilization approach. In the indirect approach, the noisy image is first processed with a variance-stabilizing transformation (VST), which renders the noise approximately Gaussian with a known constant variance. Then the transformed image is denoised with a Gaussian denoising algorithm, and finally an inverse VST is applied to the denoised data, providing us with the final estimate of the noise-free image.

In addition to a suitable VST, the above indirect denoising process requires a properly designed inverse VST. Unfortunately, the importance of the inverse VST is often neglected. The simple inverse VST obtained by taking the direct algebraic inverse of the VST generally leads to a biased estimate. Usually the issue of bias is addressed by using an asymptotically unbiased inverse, but also this inverse remains highly inadequate, especially for low-intensity data (e.g., for an image captured in a dark environment or with a very short exposure time).

In practical applications involving noise removal, identifying a suitable noise model does not guarantee accurate denoising results per se, but for the best results we must also be able to produce reasonable estimates of the noise model parameters. Hence, we conclude the thesis by investigating the effect of inaccurate parameter estimation on variance stabilization; based on the theoretical results, we also devise a novel way of estimating Poisson-Gaussian noise parameters from a single image using an iterative variance-stabilization scheme.