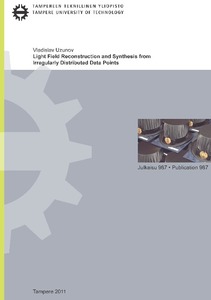 A scalar light field is any stationary monochromatic wave in the visible spectrum which propagates in an isotropic, homogeneous, non-dispersive and non-magnetic medium and thus obeys the Helmholtz wave equation. This thesis presents novel methods and algorithms related to the synthesis and reconstruction of a scalar light field, given a set of irregularly-distributed target values within a spatial region of interest. The set of target values and their positions are determined and constrained by some practical application which requires a light field. The light field synthesis task is considered in the thesis as split into two complementary subtasks. The first subtask is to reconstruct numerically a scalar light field whose values at the given locations approximate the target values of the application. The second subtask is to find the optimal configuration of an optical device, e.g. a deflectable micromirror device, which can modulate an incident light wave to produce the desired, reconstructed light field.

The core of the thesis studies problems related to the irregular sampling and reconstruction of scalar light fields. The aim is to represent a continuous light field, which satisfies a certain integral or a differential equation, by a set of discrete, irregularly-distributed samples in a manner which can be stably inverted. This study includes algorithms which reconstruct a continuous field from a discrete set of samples, together with the tools for analyzing the stability and convergence of this reconstruction. Two basic reconstruction approaches are developed. One of them is based on the method of Projection Onto Convex Sets (POCS) and the other one on least squares optimization. The POCS-based approach defines one set per transversal plane or, more generally, one set per sample. The projections from set to set are done by light propagation with the plane-wave decomposition integral. The least squares -based approaches developed in this thesis model the continuous field as expansion over a discrete set of basis functions, defining a linear space of the considered light fields. Two models have been derived - one based on the plane-wave decomposition integral, and the other one on cylindrical harmonic decomposition, involving Bessel functions of the first kind. The reconstruction is done by solving a linear system of equations, obtained by expressing each known sample by equation through the model. The linear system is solved rapidly by an iterative algorithm - the method of conjugate gradients. The weighted least squares is used to accelerate moderately the convergence of the conjugate gradients method. An advantage of the least squares-based approach is the possibility to analyze the stability of the irregular sampling set and the convergence of the iterative solver. Different sample distributions influence the stability of the reconstruction, which are analyzed with the singular values of the linear system.

The light field synthesis part of the thesis studies two optimization algorithms to find the configuration of the deflectable micro-mirror device which synthesizes to best extent a desired light wave, restricted to a transversal plane. The first approach is a precise and extensive search based on the method of simulated annealing. The second approach is a fast and greedy optimization algorithm based on matching pursuit method for signal decomposition. The field is assumed to satisfy the Fresnel diffraction integral. However, the algorithms can be easily adapted to serve any light propagation model.

The main outcome of the thesis is a general framework to be used in light field reconstruction and synthesis applications. The framework components are interconnected together and provide the following functionalities:
-> modeling continuous light fields by linear expansions;
-> reconstructing continuous light fields by rapid iterative algorithms;
-> studying the stability of a given sampling set related to reconstruction;
-> modeling the physical inconsistency of the sample values related to an application;
-> optimal configuration of an optical device for synthesizing a desired light field on a plane.

The components of this framework are consistent with each other, and yet, each component can be substituted with an alternative. The alternative would still preserve the structure of the framework and would function together with the other components. As such, this framework can be used for evaluation and comparison of alternatives for a certain module. Such flexibility allows adaptation to any application and any inherent innovation.