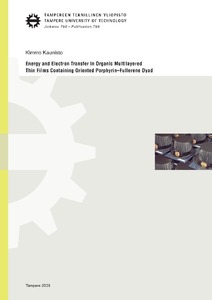 Photoinduced intermolecular energy and electron transfers in organic multilayered thin films were studied using electrical and spectroscopic methods. Intra- and interlayer processes were mainly investigated by the time-resolved Maxwell displacement charge and flash-photolysis techniques. Electrochemical photocurrent measurements were used to characterize the photovoltaic properties of the model thin film photocells. The samples were prepared by the Langmuir–Blodgett and spin-coating methods as ordered film structures to provide a parallel vertical electron transfer in all parts of the films. To demonstrate the role of each functional layer in photoinduced reactions, various layer sequences were analyzed and the results from different measurement methods were combined to identify the processes in the films.
A monolayer of oriented porphyrin–fullerene dyad, an electron donor–acceptor molecule, was used to initiate the vectorial electron transfer in the films. A phenyl vinyl thiophene derivative, PVT3, was shown to be capable of both energy and secondary electron transfers to the porphyrin–fullerene dyad when deposited adjacent to the porphyrin moiety. The charge separation distance was extended and charge separated state lifetime was prolonged by depositing poly(hexylthiophene), PHT, in contact with PVT3. In the final charge separated state of such a complex film, the holes are located in the PHT network and the electrons in the fullerene sublayer with the charge recombination in a time domain of seconds. Poly(phenylene quinoxaline), PPQ, was used as an electron acceptor from the fullerene radical anion, increasing the charge separation lifetime for a porphyrin–fullerene–PPQ layer sequence.
Crucial role of the excited porphyrin–fullerene dyad for the overall charge transfer efficiency in the cells with a phthalocyanine derivative, ZnPH4, as an electron donating moiety to the dyad, was demonstrated. The electron transfer from ZnPH4 to the porphyrin cation was shown to be extremely efficient yielding the phthalocyanine cation and fullerene anion moieties. In addition, the electron transfer from PHT to ZnPH4 was demonstrated to be efficient in the corresponding heterojunction.
An electrical signal lifetime was longer compared to that of the optical signal, although the same final transient charge separated state of the film was monitored. The difference in decay times is explained by charge ejection to the molecular environment as the final charge separated state of the system, generating the long-lived free charges that affect more the electrical signal but are less pronounced in the optical signal.