Anaerobic digestion of microalgae and pulp and paper biosludge 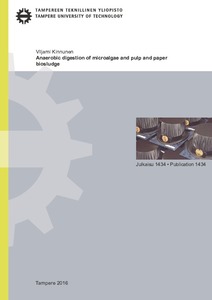 In recent decades, microalgae have attracted attention as a promising biomass source for a variety of different biofuels, including methane via anaerobic digestion (AD). However, the energy intensity and cost (e.g., for the nutrient supply) of the process chain mean that breakthroughs in algal biofuels have yet to be realized. The objective of this study was to improve the AD of wastewater-grown microalgal biomass, marine algal residues following lipid extraction for renewable diesel production and to improve the AD of pulp and paper industry biosludge. The digestate from the latter substrate could provide nutrients for algae cultivation and lipid extraction followed by AD offers the possibility of obtaining multiple products from algal biomass, as envisaged by the algal biorefinery concept.

Based on the results of this experimental work, pretreatments and novel reactor designs can be used to improve the AD of microalgae. In this study, BMPs for wastewater- and digestate-grown mixed populations of microalgae varied between 154 and 273 L CH4 kg– 1 volatile solids (VS). Low-temperature (3 h, 80°C) pretreatments enhanced the BMPs by 11–27%. However, to ensure positive energy balances, the availability of waste heat was necessary. Due to longer solid retention times, the AD of microalgae in unmixed, accumulating-volume reactors (AVRs) at 16–21° C was more feasible than AD in conventional completely stirred tank reactors (CSTRs) at 35°C when the solid concentration of the algal biomass was low (< 4% total solids [TSs]). Biological (at ~60°C) and freeze-thaw pretreatments enhanced the methane yield (32–50% increase) and the mineralization of nitrogen and phosphorus (41–84% increase) in the low-temperature AVRs.

In the present study, the AD of marine algae residue after lipids were extracted for renewable diesel production was demonstrated and the salt concentration of the marine algal biomass did not affect AD. Thermophilic AD in the CSTR resulted in a 48% higher methane yield (220 L CH4 kg–1 VSs) of algal residues compared with mesophilic AD. However, unlike mesophilic AD, ammonia, which originated from the high nitrogen content of the algal biomass, inhibited the thermophilic process.

AD of pulp and paper industry biosludge mineralized nutrients to a soluble form, making effluent a potential media for algal cultivation. The methane yield from the biosludge was low (78 L CH4 kg–1 VS) but increased by 77% with thermal pretreatment (20 min, 121°C). The pretreatment also resulted in AD with a retention time of 10 d, as compared to 14 d for untreated biosludge. However, the energy balance of the pretreatment was dependent on the solid concentration and temperature of the biosludge from the industrial process.

To conclude, this work demonstrated AD of microalgae under psychrophilic, mesophilic, and thermophilic conditions. The low energy balances emphasize that improvements in algae cultivation are required and/or other benefits (e.g., nutrient recovery, value-added products, and waste treatment) obtained for algal AD to become a full-scale application.