Calibration of Aerosol Instruments in a Wide Particle Size Range 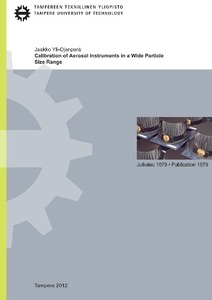 Aerosol particles have an important role in many scientific and technological issues. Aerosol particle measurements are widely applied for example in clean room technology, in atmospheric measurements and in studying the Particulate Matter (PM) emissions from traffic and industry. This thesis concentrates on developing new aerosol instrumentation both for measurement and calibration purposes. On the measurement side, the driving force has been the urgent need for instruments that have a fast time response and are able to measure nanoparticles with reasonable accuracy. In this respect, the nanoparticle resolution of the Electrical Low Pressure Impactor (ELPI, Dekati Ltd.) was improved by designing, manufacturing and implementing a new impactor stage (cutpoint 16.7 nm) to the ELPI cascade impactor. The new impactor stage divides the particle size range measured by the filter stage (7–30 nm) between the new stage and the filter stage. As a result, the nanoparticle resolution of the ELPI was improved. This made the device more suitable, for example, for vehicle engine emission measurements. The new stage is currently being sold as a part of the new ELPI+ instrument, which is an improved version of the original ELPI.

On the calibration side, the main driving force behind aerosol instrument development has been the lack of calibration standards available for calibrating the number concentration responses of the instruments in the sub-micrometer size range. In this size range, the most common method to calibrate an instrument is to use a differential mobility analyzer (DMA), for obtaining monodisperse particles for the calibration, and a Faraday cup aerosol electrometer (FCAE), for measuring the reference number concentration. Even though, in principle, the DMA allows size selection up to 1 μm in diameter, the calibrations are usually limited to particles below 100 nm because of the multiple charging of particles.

To solve this problem, a new concept for realizing a number concentration standard in a wide size range was introduced. In this concept, a novel principle of first charging nanoparticles and growing them afterwards to much larger particle sizes is applied for the generation of the singly charged, fairly monodisperse calibration aerosols. Combined with an FCAE this concept, ideally, solves the calibration issues in the sub-micrometer size range. In order to test this concept, a new instrument called the Single Charged Aerosol Reference (SCAR) was designed, built and tested. In the first experiments, the SCAR was verified to produce singly charged, fairly monodisperse particle size distributions between 10 and 500 nm in diameter and to be suitable for calibration purposes. As a result of a rigorous validation process, true SI-traceability was obtained for the particle number concentration output of the SCAR, and the calibration of other instruments on the absolute scale became possible. As a final necessary step in becoming an internationally recognized number concentration standard, an intercomparison between the SCAR and two number concentration standards of the National Institute of Advanced Industrial Science and Technology was conducted in Japan. The results obtained with the three standards were found to agree within the uncertainty limits at all overlapping particle sizes. As a consequence, a new primary number concentration standard, which enables accurate calibration of various instruments in the whole submicrometer range, was established.