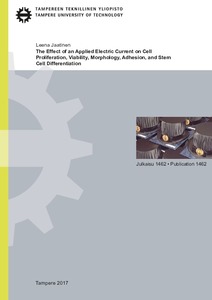 The importance of electrical stimulus is often underrated in cell biology and tissue engineering, although electric fields and currents, both endogenous and applied, play a great role in many cellular functions. Electrical stimulation of the cells causes direct effects on cells, such as rearrangement of the cytoskeleton, redistribution of membrane receptors and changes in calcium dynamics, as well as electrochemical reactions at the electrode/electrolyte interface. In this thesis, the effect of an applied electric current on cell proliferation, viability, morphology, adhesion, and stem cell differentiation was studied. The electric stimulation was applied to two different types of mammalian cells, mouse myoblasts and adipose-derived stem cells that were either in a direct contact with the electrodes or in a contact with the electrodes through the electrolyte.

The applied electric current changed the cell spreading characteristics on the electrode, and induced the more elongated cell morphology even when the cells were not cultured directly on the electrode. However, after a certain threshold, the increase in current dose resulted in decrease in the cell viability and sometimes also on the cell proliferation rates. The stimulation influenced the cell adhesion as well, studied by both quantitative and qualitative methods on the electrode and in a biomaterial scaffold. The low currents decreased and higher currents increased the cell-substrate adhesion forces. The highest adhesion forces were related to the poor cell viability and at the highest current values, it was impossible to detach the cell from the substrate. The increase in electric current also decreased the cell migration and adhesion to the scaffold. In addition to the changes in their morphology, the stimulation of the adiposederived stem cells also modified their differentiation pattern. Stimulation of the stem cells with electric current and electrochemically released Cu2+ induced the upregulation of neuron-specific genes and proteins, whereas stimulation with current only mainly induced changes in the cell morphology.

As demonstrated in this thesis, electric stimulation induces changes in many cellular functions and might offer an easy and cost-effective method to regulate them in future in vitro and in vivo applications. For instance, electric current could be used for 3 controlled arrangement of cells within the scaffold or for inducing the neuronal differentiation of stem cells.