Efficient and Robust Methods for Audio and Video Signal Analysis 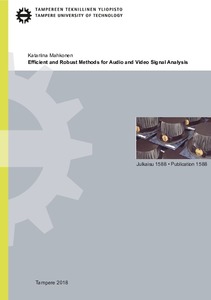 Computational efficacy of information retrieval based on multiple measurement modalities has been considered in this thesis. Specifically, a cascade processing framework, including a training algorithm to set its parameters has been developed for combining multiple detectors or binary classifiers in computationally efficient way. The developed cascade processing framework has been applied on video information retrieval tasks of video cut point detection and video classification. The results in video classification, compared to others found in the literature, indicate that the developed framework is capable of both accurate and computationally efficient classification. The idea of cascade processing has been additionally adapted for the ASR task. A procedure for combining multiple speech state likelihood estimation methods within an ASR framework in cascaded manner has been developed. The results obtained clearly show that without impairing the transcription accuracy the computational load of ASR can be reduced using the cascaded speech state likelihood estimation process.

Additionally, this thesis presents my work on noise robustness of ASR using a nonnegative matrix factorization (NMF) -based approach. Specifically, methods for transformation of sparse NMF-features into speech state likelihoods has been explored. The results reveal that learned transformations from NMF activations to speech state likelihoods provide better ASR transcription accuracy than dictionary label -based transformations. The results, compared to others in a noisy speech recognition -challenge show that NMF-based processing is an efficient strategy for noise robustness in ASR.

The thesis also presents my work on audio signal enhancement, specifically, on removing the detrimental effect of reverberation from music audio. In the work, a linear prediction -based dereverberation algorithm, which has originally been developed for speech signal enhancement, was applied for music. The results obtained show that the algorithm performs well in conjunction with music signals and indicate that dynamic compression of music does not impair the dereverberation performance.