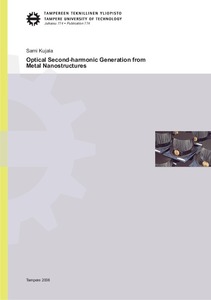 In this work, we study the second-order nonlinear optical properties of regular arrays of L-shaped gold nanoparticles supported by a substrate. The second-order responses of the samples are shown to depend sensitively on the detailed structure of the samples, which gives rise to interesting and complicated effects in the nonlinear responses, which have not been considered before. The nonlinear measurements are complemented by polarization-dependent linear measurements. In particular, we will show that the sensitivity of second-order processes to symmetry provides important information about the role of structural defects in the nonlinear properties of the structures.

Simple polarized spectral transmission studies in conjunction with second-harmonic generation experiments indicate that the second-harmonic generation from the samples is enhanced by plasmon resonances of the metal particles. Furthermore, these resonances, and thereby second-harmonic generation can be tuned with particle size, shape, and their arrangement in the array. More detailed polarization studies reveal that the certain details of the responses are due to defects of the samples. These defects may give rise to symmetry breaking and that way render ideally symmetric structures chiral. To study the role of these defects in detail, a simple scatteringmatrix type formalism is developed to express the tensorial nature of the nonlinear optical process. By relying on the transformation properties of the few lowest order multipoles, their importance to the optical response can be quantified. A symmetryforbidden tensor component is found to dominate the magnitude of the response and moreover, this component has a strong multipolar character. A simple model is built to explain this behavior. The model assumes that the symmetry is broken by surface defects on the nanoparticles. These defects give rise to the effective dipoles and quadrupoles in the total second-harmonic signal from that particular nanoparticle.