Oxidation and control of iron in bioleaching solutions 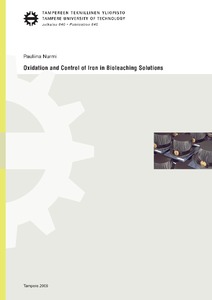 
Nurmi, P.
Tampere University of Technology
This publication is copyrighted. You may download, display and print it for Your own personal use. Commercial use is prohibited.

In bioleaching processes biological oxidation of iron and sulfur is exploited to solubilize and recover metals from low-grade sulfide minerals. Ferric iron produced by the microorganisms acts as an oxidizing agent in this process. Iron control, i.e., partial removal, is needed to prevent the excessive accumulation of dissolved iron in bioleaching circuits. The final effluents from these processes have to be treated effectively to neutralize the streams and to decrease the high concentrations of dissolved iron and sulfate.

The objective of this study was to improve the effectiveness of bioleaching and iron removal from hydrometallurgical effluents by developing bioprocesses for the oxidation and control of iron to be used in these applications. The Fe2+ oxidation kinetics by a Leptospirillum ferriphilum dominated fluidized-bed culture at pH 1 was determined and models describing the individual and combined effects of inhibitors on the kinetics developed for predicting oxidation rates and thus determining the required retention times of Fe2+ oxidation bioreactors. For ferric iron regeneration and iron control during heap bioleaching and for iron and sulfate removal from bioleaching and other hydrometallurgical effluents an integrated laboratory-scale bioprocess was developed. The process involved a low-pH fluidized-bed reactor (FBR) with activated carbon matrix for continuous biological iron oxidation coupled with a pH adjustment unit and a gravity settler for precipitative removal of iron and sulfate. The objective in the development of the integrated bioprocess was to demonstrate the technical feasibility to couple biological Fe2+ oxidation with precipitative iron and sulfate removal, and to determine some of the key operational limits and optimal conditions for such a process on a laboratory scale. The performance of the system was modeled in order to recognize and verify the associations between operational and performance variables.

With the integrated laboratory-scale bioprocess, experiments were conducted with simulated and real barren heap leaching solution and excellent performance was demonstrated. The highest Fe2+ oxidation rates in the FBR were 10 g Fe2+/L•h (conversion efficiency of 96%) and 8.2 g Fe2+/L•h (conversion efficiency of 99%) for the simulated and real heap leaching solution, respectively. Below the retention time of 1 h oxygen mass transfer from gas to liquid limited iron oxidation rate. For <30% Fe3+ precipitation, the optimum pH range was between 1.5 and 2.0. At pH 2, the concurrent Fe2+ oxidation and partial precipitative iron removal was optimized at the retention time of the FBR of 1.5 h, with iron oxidation rate of 5.1 g Fe2+/L•h and 37% iron removal.

For the treatment of effluents from bioleaching processes, the process was further developed by using KOH and CaCO3 to neutralize the pH in the range of 2.5–3.5. Upon increasing the pH, the Fe2+ oxidation rate remained high and ferric iron removal was significantly enhanced as the precipitation increased to optimally 96–99%. During the optimal process conditions also averagely 66% of the sulfate precipitated. Iron and sulfate precipitated mainly as jarosites.

It can be concluded that the process described above has potential for high-rate and high-efficiency ferric iron regeneration and control and for high-rate and high-efficiency precipitative iron and sulfate removal from solutions in bioleaching operations and possibly also other hydrometallurgical effluents and acid mine drainage. Scientific studies have not previously been published on combined ferric iron regeneration and control aiming at improving the efficiency of heap bioleaching. Compared to the most commonly used chemical iron oxidation and removal techniques, the developed bioprocess has the advantages of operating at ambient temperatures and pressures, not needing chemical reagents for iron oxidation and avoiding the formation of voluminous ferric hydroxide precipitates. The few other iron removal methods utilizing biological iron oxidation reported in scientific journals have not been developed or tested for bioleaching solutions. Compared to the few related patented bioprocesses the bioprocess developed in this study removes also sulfate in addition iron, and achieves comparable or better iron and sulfate removal performances with simpler reactor configuration. Further research is needed on the performance of the process on a larger scale to determine the detailed design criteria and scale-up principles for the individual unit operations and to optimize the performance of the system. Especially the optimization of the precipitation and gravity settling needs attention because the hydraulic conditions are extremely important in terms of determining the properties of the Fe(III) precipitates produced and the required downstream processing and disposal measures.

Effective management of complex bioleaching systems and hydrometallurgical effluent treatment processes requires models that accurately describe these systems. For the data from the experiments with the simulated heap leaching solution an artificial neural network (ANN) based model was applied to model the Fe3+ production in the integrated reactor system. The proposed model reliably (R2 value of 0.90) predicted the effluent Fe3+ concentration based on the selected operational parameters (influent and effluent pH, redox and dissolved oxygen concentration in the FBR, retention time of the FBR, and Fe2+ loading rate). For the data from the experiments with the barren heap leaching solution, three modeling approaches were applied. Self-organizing maps provided a useful visualization tool which also enabled the recognition of the relationships between process parameters. An ANN based model reliably predicted the amounts of ferric iron precipitated based on the selected operational parameters (feed pH and Fe2+ concentration, dissolved oxygen concentration, pH and redox in the FBR, and retention time of the FBR). The best-fitting regression model also gave a good fit (R2 value of 0.87) with the experimental data used but the ANN model was found to perform most accurately (R2 value of 0.97). This study demonstrated that ANN type models can be used to determine the effects of changes in process parameters on the performance of complex processes once they have been calibrated for the process in question with experimental data. ANN modeling successfully applied to the laboratory-scale processes suggests its applicability also in modeling and managing similar kind of larger scale processes.

In summary, this study enables further development of bioleaching and hydrometallurgical effluent treatment processes by providing new insights into the Fe2+ oxidation kinetics of L. ferriphilum at high dissolved metal concentrations at pH 1 and into the combined effects of multiple metals on Fe2+ oxidation kinetics, that have not been previously modeled. This is also the first published work to systematically report and model concurrent high-rate biological ferric iron regeneration and control in bioleach liquors, and iron and sulfate removal from solutions associated with bioleaching processes.