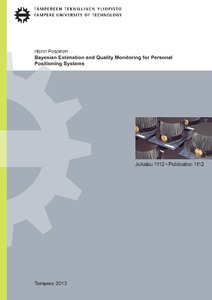 Personal positioning is a dynamic estimation problem where the ability to assess the quality of the positioning service is as important as obtaining accurate position estimates. When estimating the position of a person, as opposed to e.g. an airplane, the type of motion can change at any time as a pedestrian can board a bus, or a cyclist can board a train. Also the changing surroundings in urban navigation influence the observation noise as tall buildings blocking the line of sight to satellites are full of reflecting surfaces.

First we investigate classic robust estimation methods applied to the positioning problem, but then we focus on the Bayesian framework, as its generality allows us to take into account the abrupt changes in the state-space system. Gaussian mixture distributions and Markov chain indicator processes are used to model the changing systems. We evaluate the resulting systems mainly with sequential Monte Carlo methods, as this approach gives us an approximative joint posterior distribution of the errors and the state. We propose a general framework for the Bayesian receiver autonomous integrity monitoring in urban navigation based on the posterior probabilities.

We also use the Bayesian framework to solve the explicit effect of the sensor errors in a nominal system that estimates the state with the assumption of no changes in the models. We use the estimated cumulated effect of the errors in the time series to determine whether error is present in the system at any time. Finally, a variational Bayes algorithm is developed for detecting changes in the system noise covariances.