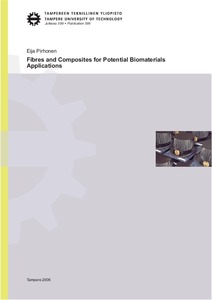 The goals of this study were to investigate the effect of composite structure on the mechanical properties of various hydroxyapatite polyethylene composites; to manufacture and characterize bioactive glass fibres formed from bioactive glasses 13-93 and 9-93; and to manufacture and characterize composites from the produced bioactive glass fibres. The literature review deals with melt derived silicate based bioactive glasses and their applications, biomedical composites and tissue engineering scaffolds. Hydroxyapatite (HA) polyethylene (PE) composites were manufactured using various constructions. HA in composites was used as particulates, and PE as fibres and particulates. The samples were formed by hot compaction. Good adhesion was obtained between the various phases and mechanical properties were markedly better with PE fibre reinforced constructions than those without PE fibres.The melt spinning of bioactive glasses 13-93 and 9-93 was successful and homogeneous continuous fibres were obtained. Fibres with diameters from 20 µm up to 300 µm were successfully produced. The strength of fibres correlates closely with fibre diameter; thin fibres possessing the greatest strength. The mechanical properties of the fibres are highly sensitive to abrasion of the fibre surface, and polymeric coating of the fibre surface greatly improved the properties and handling of the fibres.When immersed in simulated body fluid (SBF), a Si-rich layer and CaP precipitates formed on the bioactive glass fibre surfaces. The degradation of fibres is highly dependent on surface area with thin fibres degrading more quickly than thick ones. In in vitro conditions the strength of the fibres remained at initial levels for the first weeks, after which there is drop in mechanical properties. In in vitro conditions the formed surface layers retarded further degradation of the fibres and the mechanical properties levelled off after 5 to 7 weeks, thus addressing the difficulty of estimating the reaction which would occur in vivo.Laboratory scale composites were manufactured by piston injection moulding. The use of high strength glass fibres as reinforcement clearly improved the mechanical properties of composites when compared to the non-reinforced samples. CaP-precipitates formed on top of the composite structures when the samples were immersed in SBF, though the polymeric layer delayed the formation of the CaP layers.Using a sintering technique, porous 3D-scaffolds were manufactured from bioactive glass fibres. The formed scaffolds have a highly interconnected porous structure, which is a crucial property for all tissue engineering scaffolds. By optimising both the dimensions of the fibre segments used and the sintering temperature, it is possible to optimise porosity, pore size, scaffold architecture and mechanical properties.