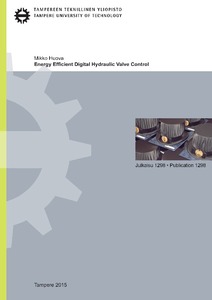 The topic of the thesis is the energy saving potential of digital hydraulic valve controlled drives. Digital hydraulic valves are capable of independent metering of flow paths, enabling reduction of energy losses when compared to traditional 4/3-way control valves with mechanically fixed opening ratio between inflow and outflow control edges. So far independent metering control has been studied using proportional valves with four and five metering edges. In addition to four- and five-edge digital valves, six-edge controlled three-chamber cylinder and four-edge digital valve with pressurized tank line are studied in this thesis and their capability of reducing energy losses is systematically compared.

The energy efficiency of the different digital hydraulic drives is studied using experimental test setup. Furthermore, a method based on steady-state calculation is used to estimate the efficiency of the drives in single- and multi-actuator systems. Steady-state analysis gives the possibility of analyzing energy losses in a certain work cycle without building a dynamic simulation model as long as velocity and load profile are known. The results of the steady-state analysis can also be applied to independent metering proportional valve systems as long as the control method is not changed and there are no significant leakages. Measured and predicted energy losses are compared to study the validity of the analysis.

The results of the steady-state analysis and measured energy losses agree relatively well for four- and five-edge controlled systems. Significant amount of power losses of three-chamber cylinders results from system dynamics worsening the applicability of the steady-state analysis. Both the experimental results and steady-state analysis show that energy losses can be decreased significantly when a four-edge digital valve is used with pressurized tank line. However, a significant amount of energy is returned to the pressurized tank line in typical load cycles and thus the supply system should be designed such that the energy of the tank line is not lost. The three-chamber cylinder enables a significant reduction of energy losses in multi-actuator systems due to the increased number of control modes. The result is remarkable since the three-chamber cylinder is fed with constant supply pressure, whereas the other systems studied utilize load sensing supply pressure. However, the reduction of energy losses depends heavily on the load cycle and therefore a number of different load profiles are studied.