Measurement of the Physical Properties of Secondary Organic Aerosol Particles 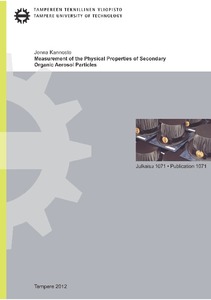 The density estimation method has been extended to smaller particle sizes and the data treatment of the method has been modified to be suitable for large data series and multimodal size distributions. The limitations of the method have been studied using both laboratory tests and simulations. The lowest mode particle diameter for the density method was found to be 10 nm. For multimodal size distributions, the density results varied approximately by 15 %. The density measurements were performed at the SMEAR II station and the density of boreal forest particles was measured.

The observed solidity of the SOA particles challenges the traditional views on the kinetics and thermodynamics of SOA formation, their transformation in the atmosphere and their implications on air quality and climate. It can influence the ability of the particles to accommodate water and act as could condensation nuclei or as ice nuclei, reduce the rate of heterogeneous chemical reactions and eventually alter the atmospheric lifetime of the particles.