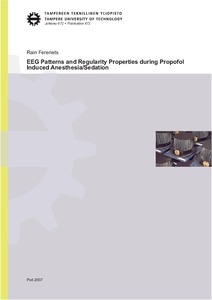 The purpose of this thesis is to study properties of the EEG signal recorded during anesthesia or sedation. The main emphasis was put on the regularity/complexity analysis of the EEG during gradually deepening sedation and the EEG patterns of burst-suppression level anesthesia. Additionally, time-frequency analysis was applied to selected EEG patterns during burst-suppression level anesthesia. The EEG signals underlying this work have mainly been recorded during propofol anesthesia/sedation, however, for the comparison purposes also sevoflurane recordings have been used. For most of the cases the EEG was recorded using the conventional skin electrodes, however for one case EEG recorded with depth electrodes from the subthalamic region of the brain was used.Regularity/complexity properties of the signals have been analyzed using several entropy based measures (Shannon entropy, spectral entropy, and approximate entropy), a coarse-grained complexity measure (Lempel-Ziv complexity), and a fractal dimension estimator (Higuchi fractal dimension). The main idea of the regularity/complexity analysis was to study the ability of the different measures to follow the anesthetic depth. In addition, the influence of the frequency content of the EEG signal, as well as co-administration of the commonly used opiate remifentanil, on the efficiency of the mentioned measures as depth-of-sedation indicators was studied. The time-frequency analysis was conducted by using quadratic time-frequency distributions (Wigner-Ville distribution, Choi-Williams distribution, and optimal distributions) in order to investigate the instantaneous frequency of the spindles during propofol induced anesthesia as well as during normal physiological sleep.The results show that, although the applied regularity/complexity measures do not depend directly on the power spectrum of the signal (with the exception of spectral entropy), they are highly sensitive to the frequency content of the EEG. Higuchi fractal dimension almost always outperformed other measures when their ability to differentiate between different levels of sedation was tested. Remifentanil was found to significantly deteriorate the ability of the tested measures to follow the depth of sedation.The time-frequency analysis of the spindle patterns shows that the angle of the trend of its instantaneous frequency is generally small. However, occasionally spindles can show either increasing or decreasing trend in the instantaneous frequency. The analysis also reveals that the spindles during propofol anesthesia have slightly higher average frequency than that of the spindles during physiological sleep.